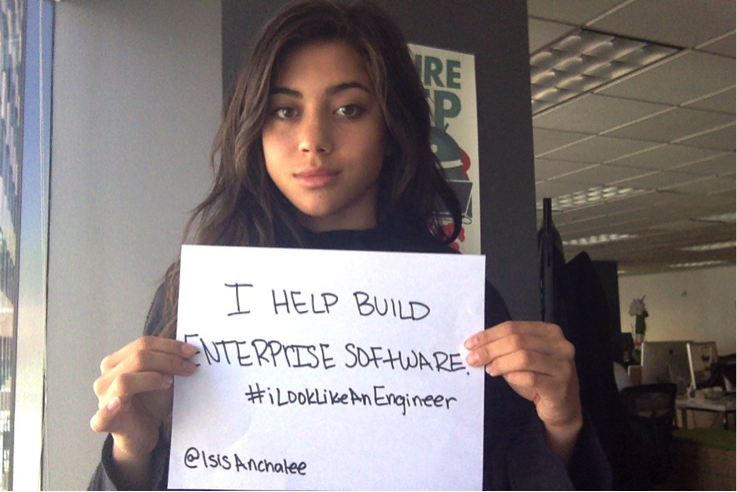 Isis Wenger wasn’t looking to start a social movement. But when her face appeared on an advertisement for OneLogin, where she works as an engineer, Isis quite literally became the face of gender diversity in the tech industry. And rather than shirk the publicity, Isis embraced her newfound celebrity and launched a social media campaign aimed at highlighting the pervasive inequalities of the industry.

Isis’ specific ad (one of four her company created) immediately generated heated discussion and controversy, which in turn has highlighted the sexism that continues to characterize this industry. Reactions ranged to comments on her appearance to doubts she actually worked at the company. It boils down to one unfortunate point: People have a set idea of what an engineer should look like, and Isis doesn’t fit that mold.

While it’s true that software development does tend to skew white and male, as a young female programmer, Isis found the idea that every engineer looks exactly the same laughable.

“This isn’t by any means an attempt to label “what female engineers look like,” she wrote on Medium. “This is literally just ME, an example of ONE engineer at OneLogin. The ad is supposed to be authentic. My words, my face, and as far as I am concerned it is.”

Hoping to instigate honest conversation about technology’s gender imbalance among those who work in the industry, Isis launched #ILookLikeanEngineer, inviting engineers to join her in challenging what engineers can or should look like by sharing their stories on social media.

The hashtag soon gained serious momentum, spawning impassioned responses from women and men alike, across a variety of industries. Today, Isis is leveraging this platform to talk about gender diversity and prejudice in tech. She recently dropped by GA San Francisco to discuss her experience with our Web Development Immersive students and answer their questions. 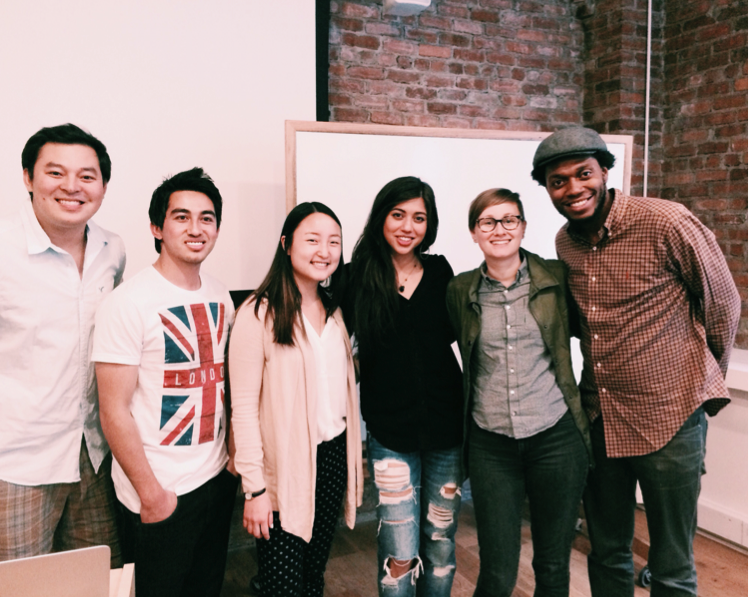 1. What do you think the controversy surrounding your ad says about the tech industry today?

I think there is a severe lack of strong, diverse role models if my smiling face with unbrushed hair on a white [background] is considered more controversial than 16-foot-tall people wearing unicorn masks.

2. How did you think of the idea for #Ilooklikeanengineer? Was it something you were thinking about before the ad came out, especially in light of some of the stories you mentioned in your Medium post and when you came to speak at GA?

I wrote my original Medium post as an outlet to point all of the attention I received about the ad. People were talking about it and sending me screenshots, and everyone had wild opinions about it so I took to writing that article to share my opinion about everything. The first day it got 500 views but the second day it went viral. It resonated with such a wide group of people, [and] others reached out wanting a way to continue to support the message which lead me to creating the hashtag.

3. Did those experiences ever make you want to quit the field? How do you continue to push yourself forward and inspire yourself to continue working in the face of adversity like that?

Hell no. I’ve been through way more challenging things than dealing with insensitive [and] emotionally underdeveloped people. I love writing code, and the amount of financial freedom it gives me is really unrivaled in any other industry. Insensitive people are always going to make insensitive comments. I don’t need to give them any power over my life. While they’re making ignorant judgments, I’m going to focus on kicking ass at my job.

4. What has been the biggest surprise for you after starting #ilooklikeangineer?

#ilooklikeanengineer was the inspiration for #ilooklikeasurgeon, #ilooklikeaprofessor, #ilooklikeaphycisist, ilooklikeacivilengineer.com. What started out as just a disgruntled blog post ended up leading a global movement that propagated into other unrelated industries.

5. What plans do you have for the campaign in the future?

OneLogin has been incredibly supportive of everything I’ve been doing. They’ve allowed me to create a hybrid role for myself balancing social advocacy with my engineering job. I have partnered with Galvanize to set up 20k worth of scholarships to diverse sets of people and have agreed to do many speaking engagements in the future.

6. What advice do you have for an engineer, especially a female one?

If you are passionate about what you do, no one can ever take that away from you. Don’t worry about what other people say [and] think, focus your energy on improving your abilities and learning awesome things.

Interested in the other dynamic and compelling speakers we’re hosting at General Assembly?

Check out an upcoming event