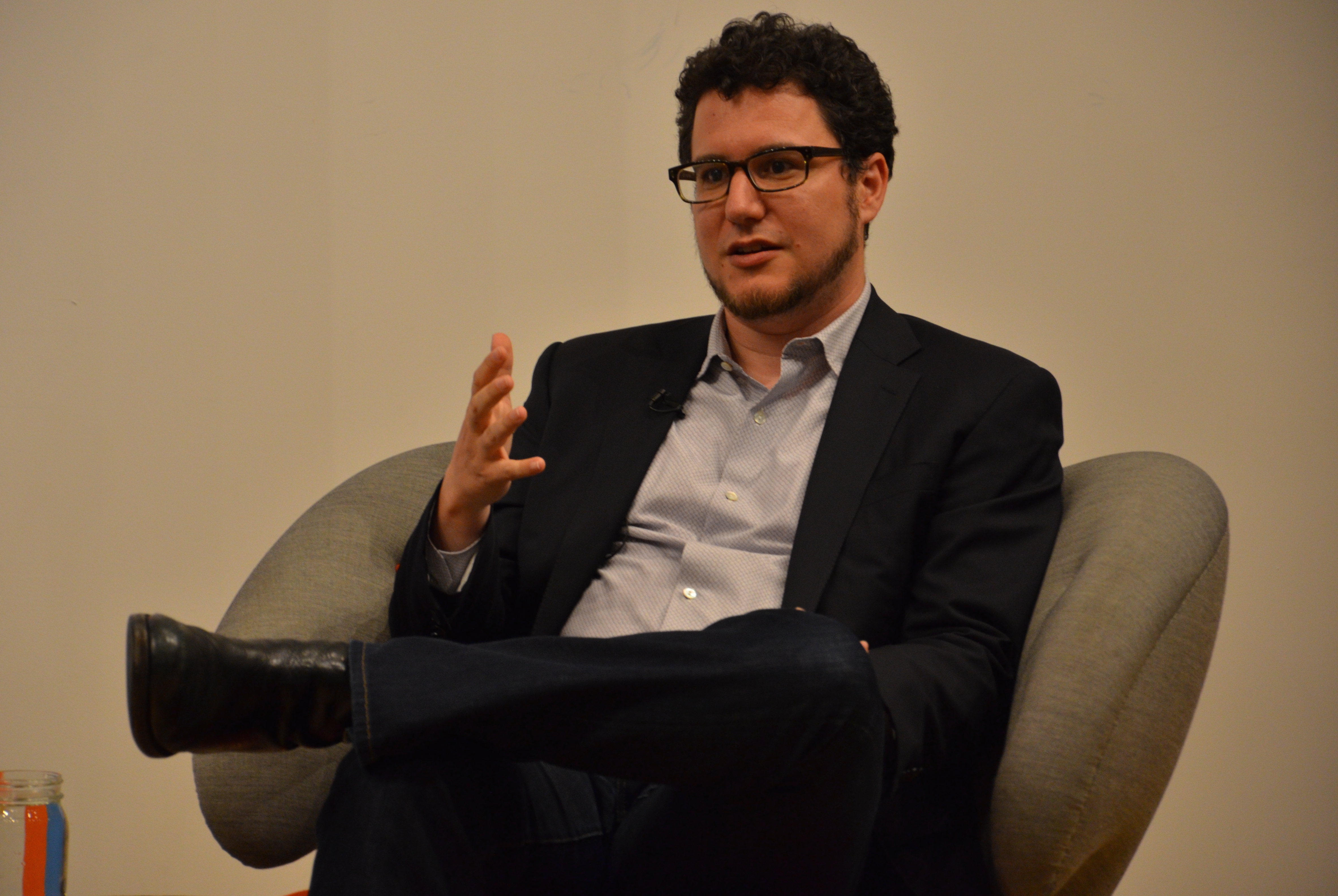 “Lean Startup is not a religion,” said Eric Ries, the 37 year-old author of The Lean Startup (2011), which is the handbook for what has become a cult-like movement embraced by entrepreneurs and innovators worldwide.

The core philosophy of the book – and of its practitioners – is to test ideas early and often by getting feedback from potential customers. Before investing very much time and money into a product, the idea is to quickly create an MVP (minimal viable product) and put it in front of potential consumers. This avoids wasting time and money developing products that people may not want.

Sitting in the front row of General Assembly where Ries spoke on Thursday night was Paul Kuznetsov, a 20-year-old entrepreneur from Ukraine who had used Ries’ methodology to create a successful e-commerce site. Kuznetsov said he made the trip to New York largely to meet Ries and hear him speak.

For the slightly less eager and financially restrained, the discussion was streamed live online where thousands of people tuned in. The interviewer was Leslie Bradshaw, an early adopter of Lean Startup methods who founded JESS3, a thriving creative agency, and is now Managing Partner at Made by Many, a business consultancy that incorporates Lean Startup methods. 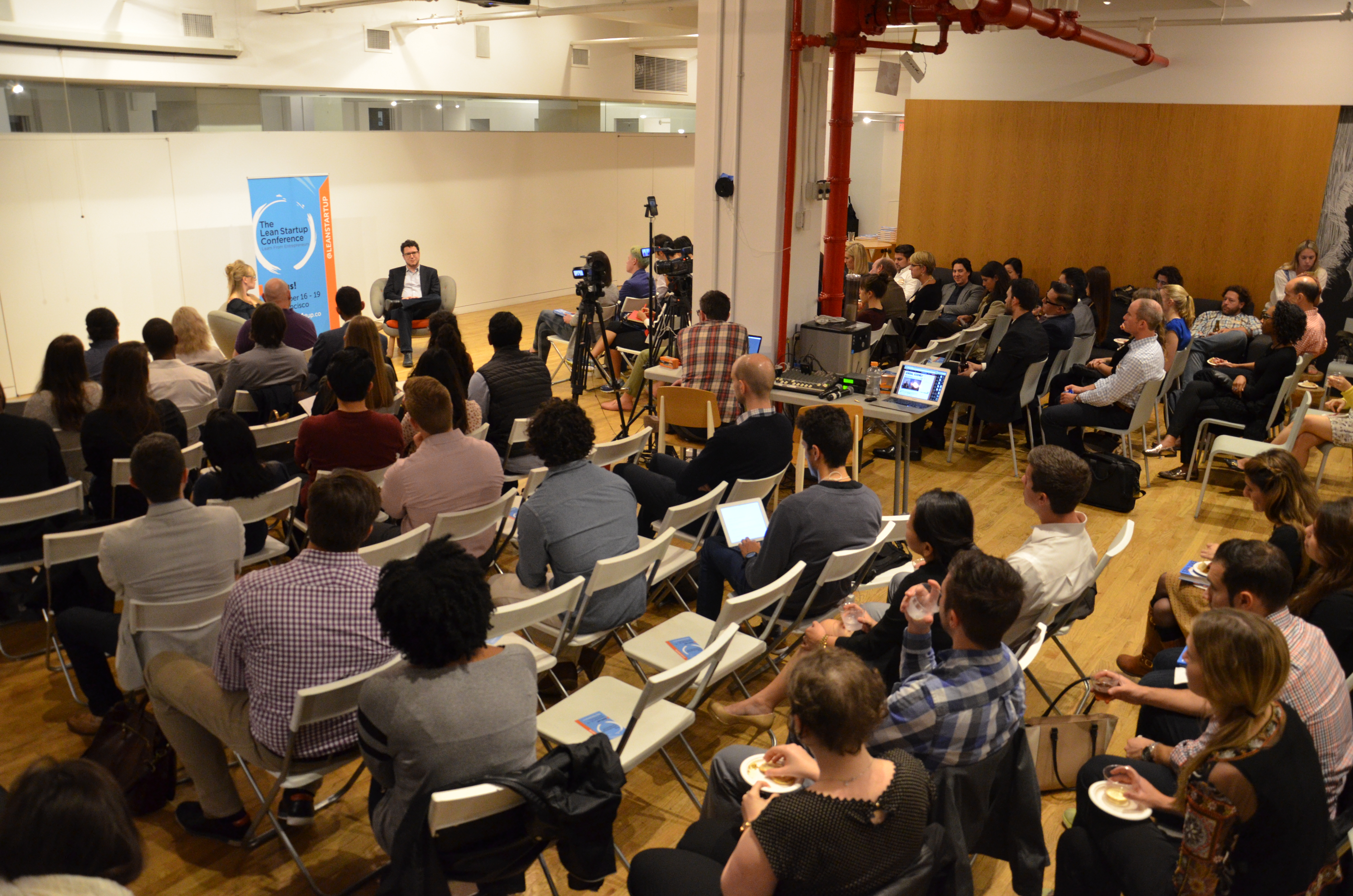 A crowd of about fifty people came to hear Eric Ries at General Assembly while thousands more joined online.

In the vein of Lean Startup not being a religion, Ries said the ideas have to evolve – that they are not absolute. Using Lean Startup for one’s business requires thinking, he said. It’s not a set of rules that will always lead to success.

“If your startup doesn’t work, you probably didn’t buy enough copies of [my] book,” he said jokingly. “Lean Startup isn’t to take on faith. You have to put the methodology itself to the test.”

“Lean Startup isn’t to take on faith… put the methodology itself to the test.”—@EricRies

When asked by Bradshaw for some “poster child” companies that have benefited from Lean Startup methods, Ries said he doesn’t like to list names of companies. However, he did mention that he has worked extensively with General Electric (GE), which he says is the largest company that has actively employed Lean Startup methodology.

Given that GE operates in so many different industries, Ries said that working with the company has shown him that Lean Startup can be applied to virtually every business. In fact, Reis said there are people applying Lean Startup principles in cancer research and space research. Working with GE also showed him that, yes, the systems at large companies are bureaucratic, but not the people, he said.

“Many of the people at large companies are very entrepreneurial,” he said.

Ries spent six months visiting with the top management of every unit of GE.

“They’re very smart and very skeptical [of Lean Startup],” he said of the GE management teams, “and if I got a question I couldn’t answer, it was basically over.”

He noted that companies like to give names to their more entrepreneurial units or practices, which he thinks is a great idea if it helps them take ownership of Lean Startup principles. 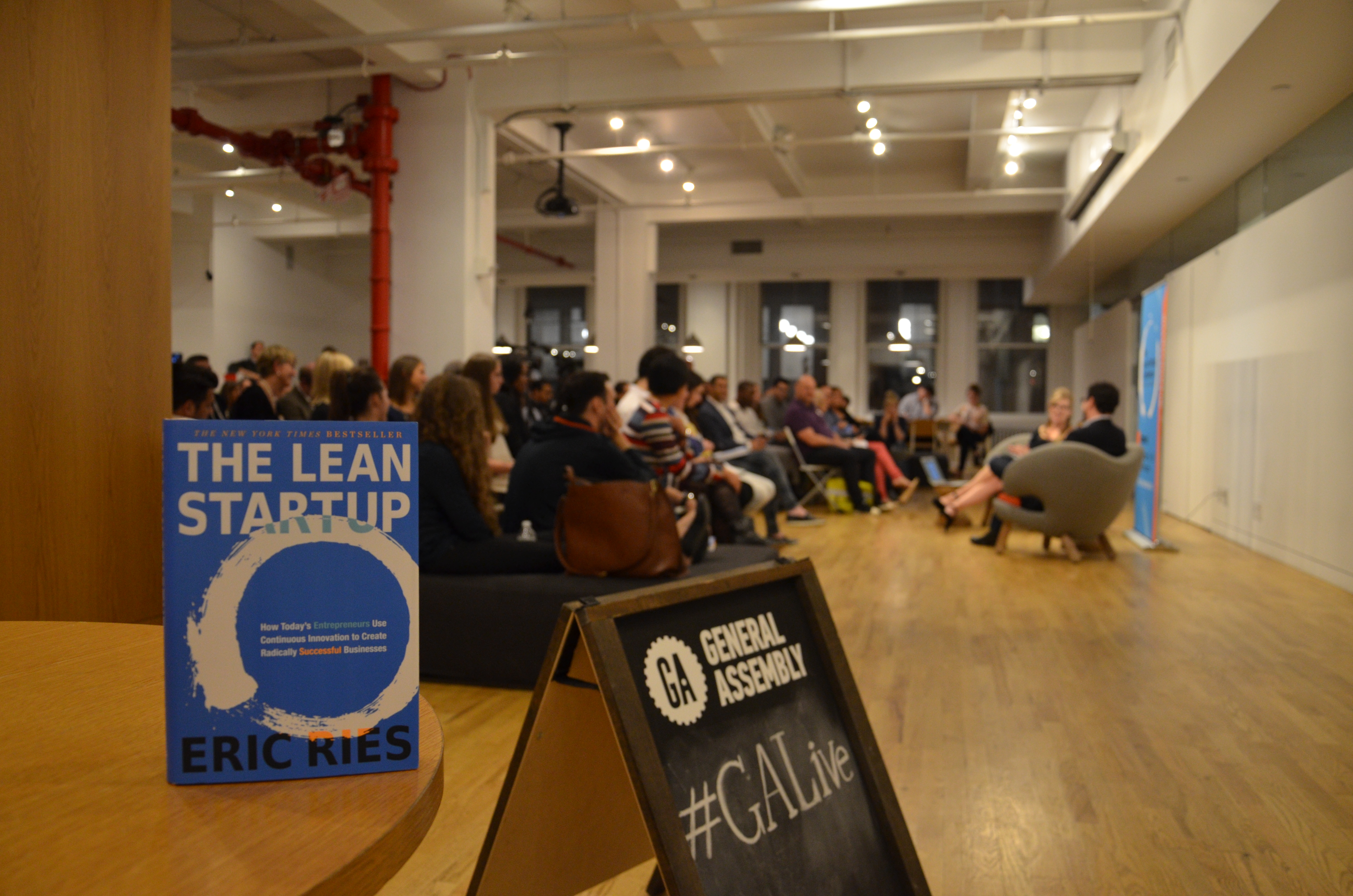 Ries addressed an audience of entrepreneurs, business leaders, and students at the packed event.

On the topic of investors, Reis said that the best investors naturally use Lean Startup principles to evaluate companies.

“Those who make decisions based on gut are getting it wrong,” he said.

And according to Reis, a business plan is a terrific thought exercise, but not to be taken as a road map.

“Those who make decisions based on gut are getting it wrong,”—@EricRies #GALive

Ries likened a rigid business plan to the way science is taught in grade school with a formal hypothesis statement that he thinks is not only boring, but constricting.

“Science isn’t about proving a hypothesis. It’s about discovering brand new things that you didn’t know or anticipate,” he said.

By the way, as a kid, when Ries wasn’t obsessing over computers, he was pursuing what he called his more “socially acceptable nerdy hobbies,” which included competing in the Science Olympics.

Like any set of ideas that has a significant following, Lean Startup also has its detractors. Some say the philosophy simply espouses listening to exactly what the customer wants, when, for example, part of Steve Jobs’ success lay in having foresight and telling the customer what they wanted.

In response to this, Ries admitted that he sometimes gets angry when he hears this common misconception and tells such critics to turn to page nine of his book where he states that the philosophy is not simply about doing exactly what customers want.

What Lean Startup is about, he said, is being honest about what is working and what isn’t, and finding reliable ways to measure success. Ries noted that in many large companies employees in different departments use different methods of measuring success, and generally, each department believes that they are responsible for the company’s increase in sales.

“What Lean Startup is about is being honest about what is working and what isn’t.”—@EricRies

“There are different realities within the same company,” Ries said, and said that uniform metrics are essential.

Bradshaw asked what Ries thought of “vanity metrics,” or metrics that mostly make founders and employees feel good about their company, but aren’t truly reflective of growth.

“Using vanity metrics to make your competitors want to kill themselves is great,” Ries said. “But using them to evaluate progress – if they’re misleading – is not good.”

Eric Ries says Lean Startup “is not a religion,” you must adapt the principles for your own business.

In response to a question from someone watching via live stream, Ries cautioned against creating a startup because it’s cool, or for the possibility of making money quickly.

“If you really want to do a startup,” he said, “go work for another startup and learn from a visionary.”

He also said that programs like Y Combinator, where founders get candid feedback from real pros, can be very valuable.

In response to another audience member’s question, Ries assumed that this person had an idea for a startup that they thought was stupid. Ries’ advice: “Try it. Test it. In two weeks, have an MVP and then you’ll see if it’s stupid.”

What’s next for Ries?

“Do you know how long it took me to come up with Lean Startup?” Ries replied initially.

But he then said that he’s working on a book that addresses a lot of common questions he has received over the years from large companies. Questions about supply chain, return on investment and legal issues. Doesn’t sound so exciting. But if it’s anything like his first book, it will be a tremendous hit. And the basic message will still be the same: “Don’t bullshit yourself. Are your strategies working? If not, re-think them.”

Don’t miss another live stream. Sign up for our newsletter to find out who we’re hosting next, live at General Assembly.