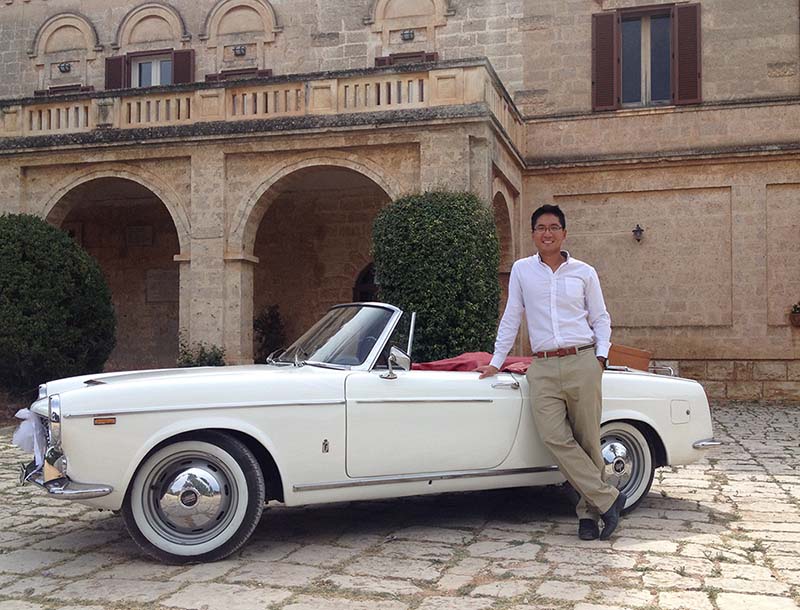 After a failed attempt at starting a carpool company between 2011 and 2013 in Beijing, I found myself back in the States job searching for startup gigs in the Greater Seattle Area.

Having graduated from the University of Washington with a non-computer science degree, many technical positions were often out of reach.

So during my job search, I started working on a side project to brush up on my technical skills; and I decided that if I was going to build something, it had to fit the following criteria:

I had countless web and mobile app ideas in all sorts of industries, but none of them seem to fit all four of my criteria; especially regarding #4, speed. 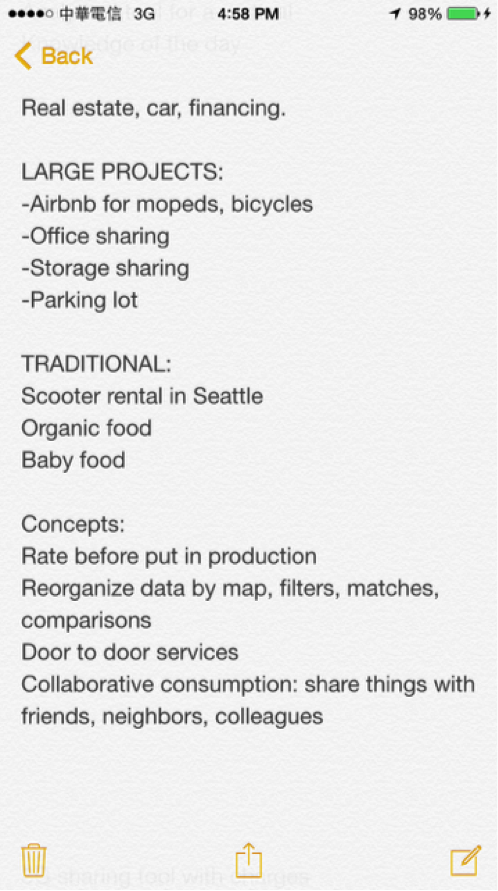 Meanwhile, I was immersed in my job hunt, which was shaping up to be extremely time-consuming; especially tailoring my resume for every application. Even after countless revisions, many of my submissions were automatically rejected simply because I wasn’t using the right keywords.

I  did a bit of research and discovered Applicant Tracking Systems (ATS), the computer software used by 90% of companies to manage their recruitment processes and filter resumes. I was on a quest to get my resume through.

I wondered why there wasn’t a tool that could compare job listings against my resume and help me get through these systems? And with job-seekers and recruiters both relying heavily on the web for searching and recruiting, building a web tool made perfect sense, and would fit all four of my project criteria.

Tip #1: Choose the best tool and language to help you release fast.

After completing a python course online, I tried setting up Python’s web framework. However, it didn’t seem intuitive to me. I decided to go with what I knew and built my MVP using PHP. I know many would argue that PHP is not the best language, but the result was that I released my first version quickly.

Tip #2: Choose the right platform for the right use case. Not because it’s trendy.

Mobile apps are all the rage today. But from a user-perspective, do job-seekers spend more time tailoring their resumes on their desktop or mobile? Despite what’s popular, I knew my first version should be a website.

I found that recruiters used Applicant Tracking Systems (ATS) to search for keywords to select potential candidates from the sea of submitted resumes.

So I started coding. Or I should I say, I started Googling.

The first Google query was “How to find a word in a sentence in PHP.” And according to a StackOverflow article, it was the code below:

I tried it. And it worked. This was the first success!

Throughout this process I came to understand that I have to trust my instincts and belive in my own capabilities. If I had chosen to build a large feature first, I would not have been able to gain the experience and confidence needed to sustain it. So the key here is to build a series of small features that result in functioning product. In other words, take the lean product development approach and focus on building one feature at a time. 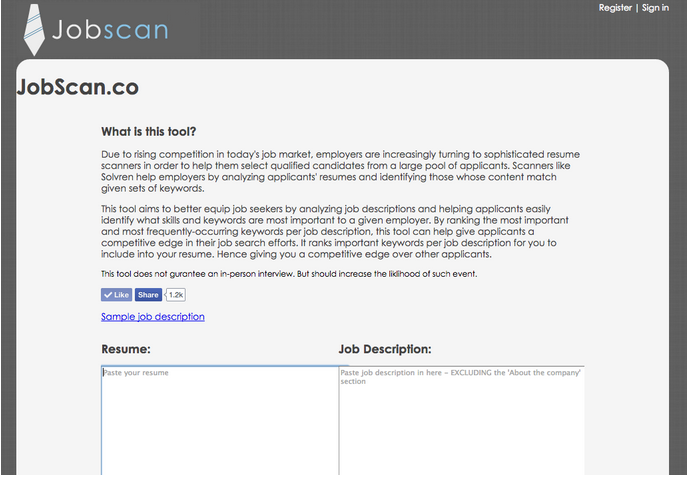 As you can see, I focused on the core functionality of the product first before its appearance. There was no ‘about us’, ‘what’s new’, or ‘my account’ section. Heck, I  didn’t even have a registration system when I launched. Would these pages matter if users didn’t find the product useful? I doubt it.

I also took the MVP approach to building the logo, selecting the color scheme, and domain.

For the logo, I searched for job-related logos, selected a couple I liked, and decided upon a tie logo that seemed simple enough to make. I then YouTubed “How to create a logo” and built the logo in two hours.

For the domain, I didn’t want to fuss over the name. A simple domain name could take many startups and individuals days to decide. I listed ten different domain name words, mix-matched them, and Jobscan sounded easy to remember. Only .co was available for $8.99 a year. So sure why not.

Tip #4: Focus on the functionality of the product.

Yes, the color scheme, domain name, logo, wording, etc matter; but only if the core product actually helps users solve their problems. If the product doesn’t solve users’ problems, everything else is secondary. So initially, I spent less than 10% of my time on these secondary tasks.

After further research about how ATS works and implementing the basics, I launched Jobscan in 60 days while learning how to code and traveling between Seattle, Taipei, and Beijing. 48 hours after launch in January 2014, Lifehacker found out about it and published Jobscan Analzes Your Resume, Helps You Get Past Computer Screeners and brought over 5,000 visitors overnight. And this article has been viewed 72,000 times to-date. 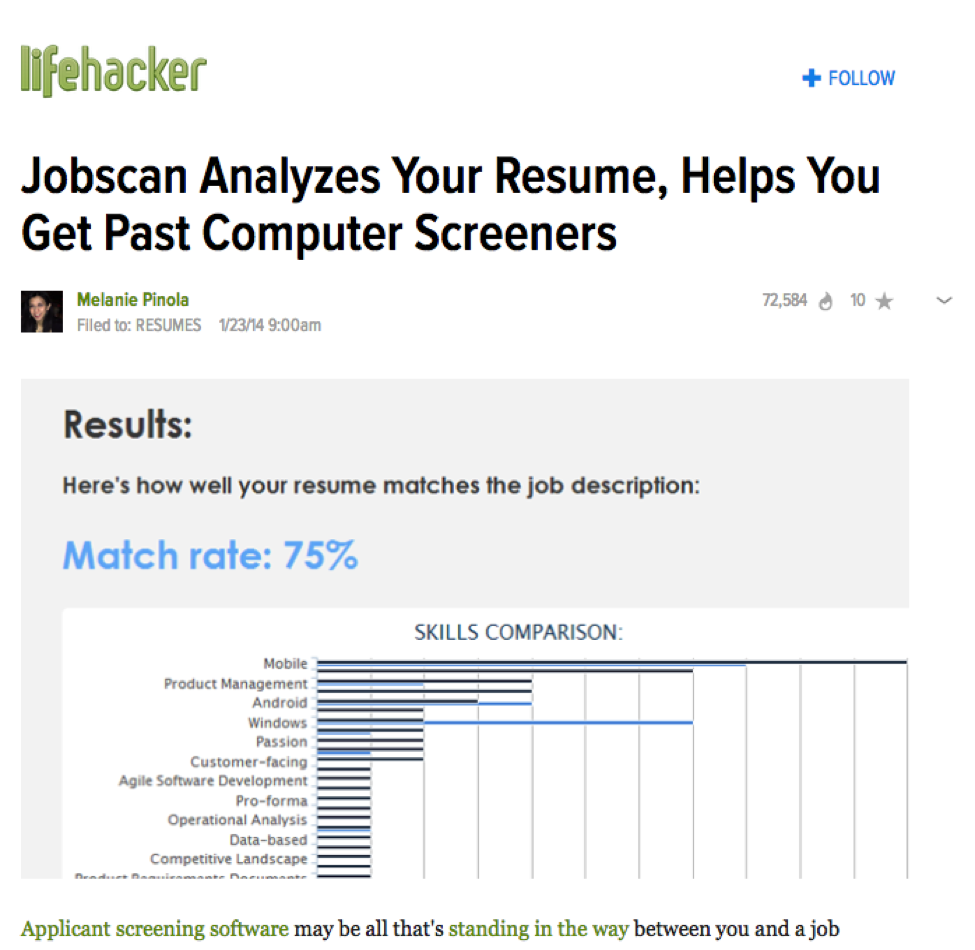 The majority of users proved to be satisfied with it after two weeks. So I thought: I wonder if I could charge for this service in order to make it even better and more reliable?

Again, taking the MVP approach, I didn’t want to integrate the entire payment solution into Jobscan. So I built a test page for this page to appear when sign-up buttons are clicked on:

I simply track the clicks by increasing the count by 1. And to my surprise, people actually click on it. 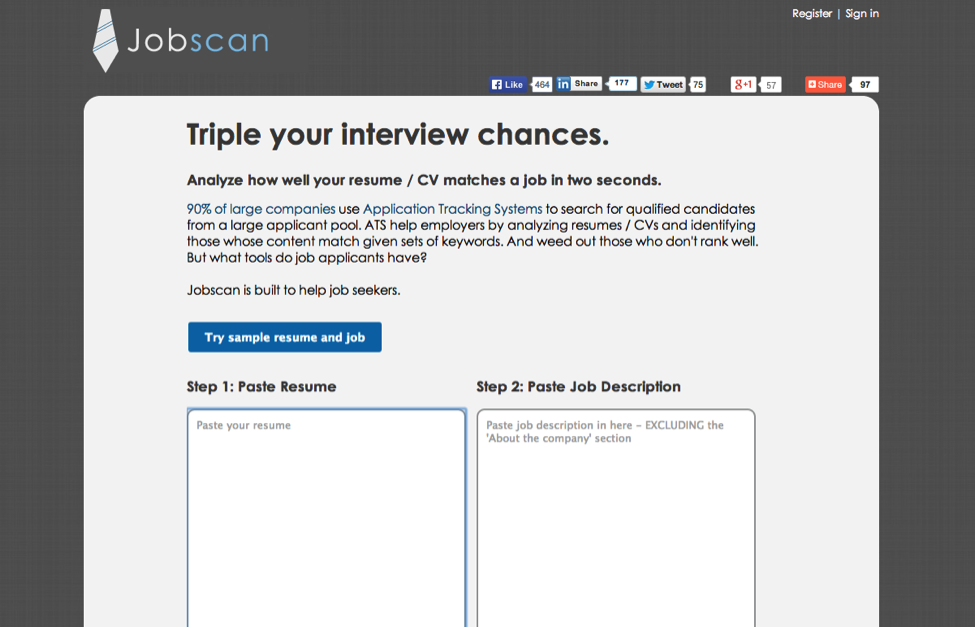 For the past 12 months, job seekers from 190+ countries have visited Jobscan to compare their resumes against job descriptions over 100,000 times in order to increase their interview chances. State and private career services in the U.S., Canada, and Australia—such as State of California Employment Development Department, Hire Heroes, and Lee Hatch Harrison—have included Jobscan into their workshops as “latest the tool every job seeker must use.” 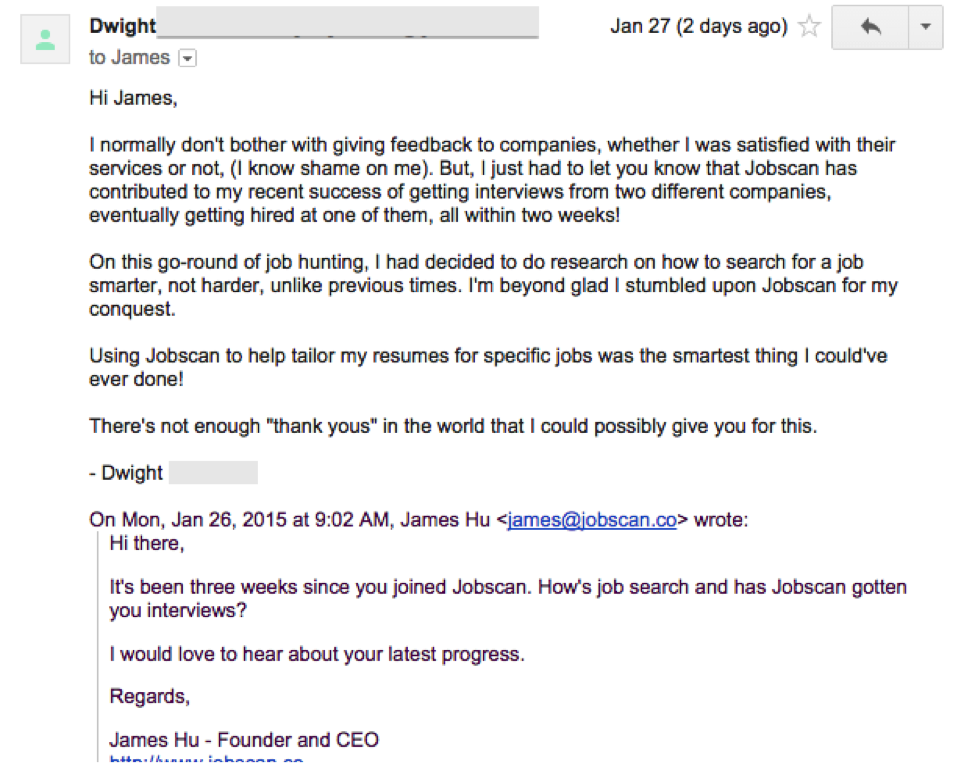 Jobscan’s growing team is working hard making its core algorithm even smarter in order for more job seekers to land their ideal interviews and jobs.

James Hu is the founder  and CEO of Jobscan, a web tool that helps job seekers land interviews by optimizing resume keywords. With eight years of technology product experience, he previously co-founded an award-winning transportation start-up and worked as product managers for Kabam Games, Groupon, and Microsoft. James grew up in Seattle and graduated from the University of Washington and is determined to make job searching and recruiting easier. James is fluent in English, Chinese, and restaurant Spanish.