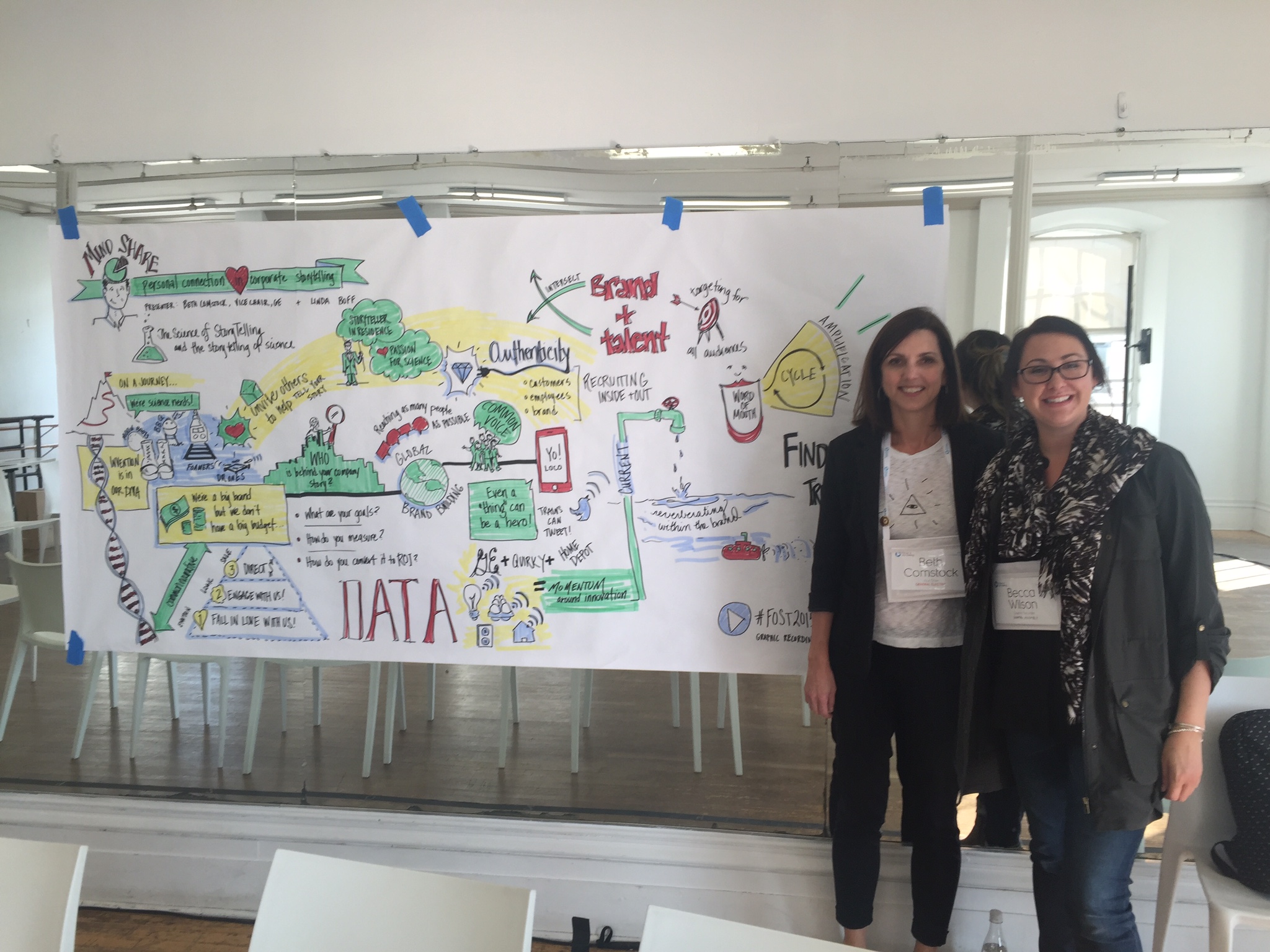 Last week, I had an opportunity to attend Charles Melcher’s Future of StoryTelling Summit at Snug Harbor in Staten Island. The Future of StoryTelling (FoST), a conference founded in 2012, invites influential thinkers to discuss how technology is going to change the “most fundamental unit of human culture”–the story. I was part of a team of graphic recorders visually capturing various roundtable sessions throughout the two-day event. What follows is my own story of my experience at the conference and some of my thoughts about what the future has in store for storytelling.

The day kicked off with a ferry ride across the Hudson, during which we got an opportunity to meet and network with other attendees. In addition, FoST staffers walked around with headsets to offer everyone the opportunity to listen to Brooklyn Ghost Squad’s podcast about investigating the ghost of Snug Harbor, which was recorded during last year’s conference. It was the perfect way to set the stage for two days focused on the power of storytelling.

We arrived on Staten Island and took buses to Snug Harbor. Our team of graphic recorders met with an onsite contact who helped us to find our assigned session rooms and make sure our materials were prepared. Unfortunately this overlapped with the opening general session, but I heard it was amazing and included a demonstration by legendary Disney animator Glen Keane painting in 3D using a VR headset.

My first session was a roundtable with Jake Shapiro, the CEO of PRX (the Public Radio Exchange). Roundtables are small, personal sessions with fewer than 30 people, a moderator, and an amazing speaker. For each speaker, FoST created a video, which you’re advised to watch in advance of the conference to help prepare you for the discussion. (If you click Jake’s name above it will link you to his video; I recommend checking it out!)

We kicked off our session by watching his video for anyone who missed it, and then we talked about the evolution of podcasts over time. 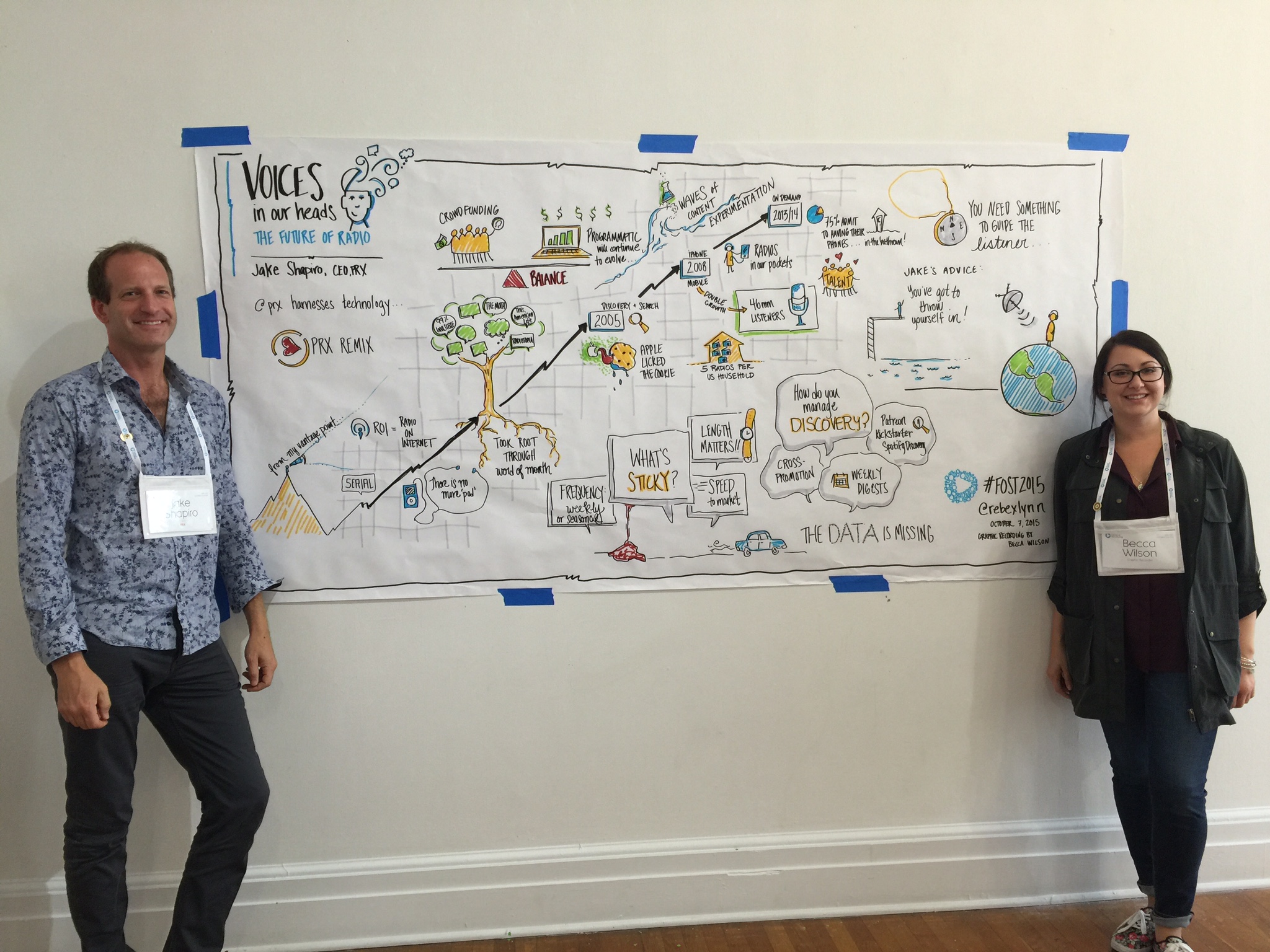 Posing with Jake next to my completed graphic recording

Between sessions, attendees were invited to visit the Story Arcade and VR Spaces, both of which featured cutting-edge, hands-on examples of innovative storytelling and new technologies.

In the afternoon, I recorded a talk by poet and educator Clint Smith where he challenged participants to reflect on their lives with a creative writing activity.

It was extremely powerful to witness, and I don’t think anyone there will forget it anytime soon. 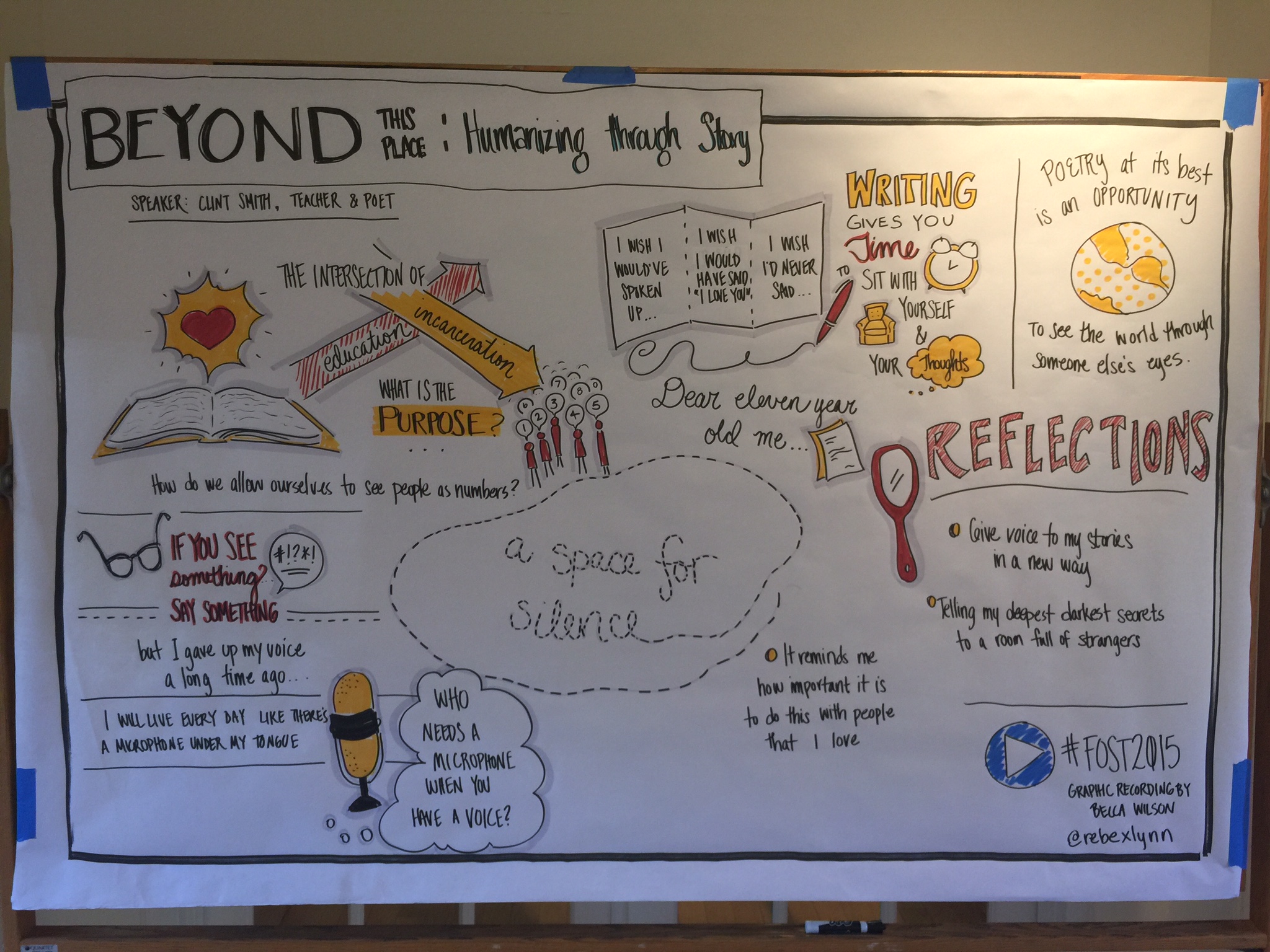 The graphic recording I did during Clint’s session

The last workshop of my day was with comic artist Blue Delliquanti about the language of graphic novels. This session comprised 2 activities and was extremely interactive and thought-provoking. For the first activity, Blue had printed out stacks of photos from the creative commons and cut them into 3×3″ squares. She provided us glue sticks, pens, paper, and cardstock and challenged us to use the images to create our own comic. The results were unique and fascinating–some people cut their photos into panels to show motion; others used the same photo multiple times with different subtitles to tell a personal story.

For the second activity, Blue had participants start a comic with one photo and then pass the page to the person on their left, who continued by adding a second photo to the comic. I’d done story-building activities before, but never using imagery, and the result was even more unique. In our debrief, I loved learning about how the gutter (the space between comic panels) is one of the only mediums where an artist can leave room between story elements that is open to interpretation by the audience.

I was happily surprised that the conference had a lot of workshops facilitated around finding and telling your own personal story–improv classes, standups, creative writing exercises, etc. I thought this was interesting because, though FoST is a very futuristic conference, those things have been around for a really long time, and I think the commitment to them will continue.

After this final workshop of Day 1, FoST hosted a happy hour with passed hors d’oeuvres. I ran into longtime GA corporate training instructor Matt LeMay. He told me about his visit to the VR Space which he described as “a complete sensory experience of flying like a bird through the cityscape of New York.” When he described his subsequent vertigo, I was glad I hadn’t given it a try, too. 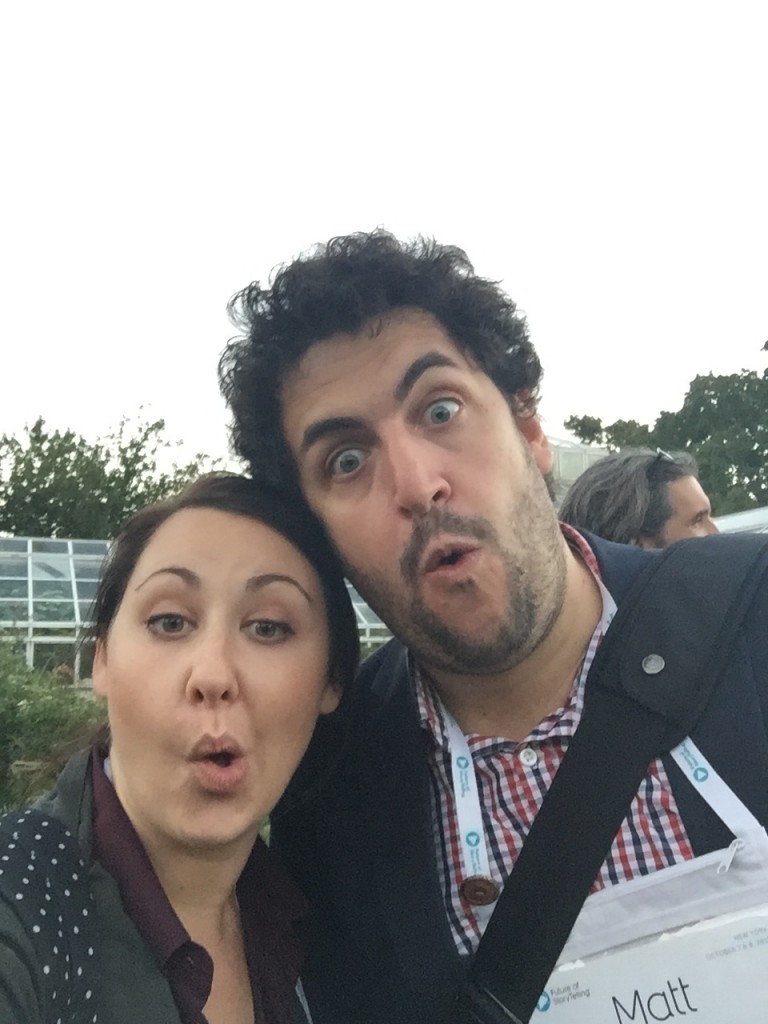 Technological advances like VR, AR, and mobile devices are definitely taking storytelling it to a new level, but all the shiny objects in the world don’t make up for stories that aren’t authentic. An important takeaway for me was that you can’t just add a bunch of tech to a bad story.

The evening wrapped up with a beautiful dinner inspired by Harry Houdini’s magical stories, and we were shuttled back to the city in buses.

We began with breakfast at the Biergarten at the Standard Hotel and then hopped on buses to Snug Harbor for the Day 2 opening ceremony, which I got to attend this time! The session started with William Close playing his earth harp and a performance by Miwa Matreyek that blended projections and her own body. Here’s a link to a video of a different performance than the one I saw, but it’s amazing anyway.

Next up was former Vice President Al Gore, who talked about his personal quest to launch a satellite and get another shot of the earth like the famous ‘Blue Marble’ photograph taken by the crew of Apollo 17.

The last speaker of the opening session had no choice but to join us remotely–Edward Snowden–and he used his time to tell us a story: When he was a young, internet-obsessed boy, he discovered a website for a nuclear facility and was able to access classified documents. Being the honest kid he was, he called them and reported it. Four months went by and then one day, the phone rang at his house and his mother answered. It was the nuclear facility asking to speak with Edward. He said his mother put her hand over the phone angry and bewildered, and asked, “What did you do!?” When he got on the phone, the caller thanked him for reporting the hole and told him they’d fixed it. Then, and this is my favorite part of the story, the caller told him that when he grew up, he should put his skills to good use by working for the US government. Snowden and the audience laughed. 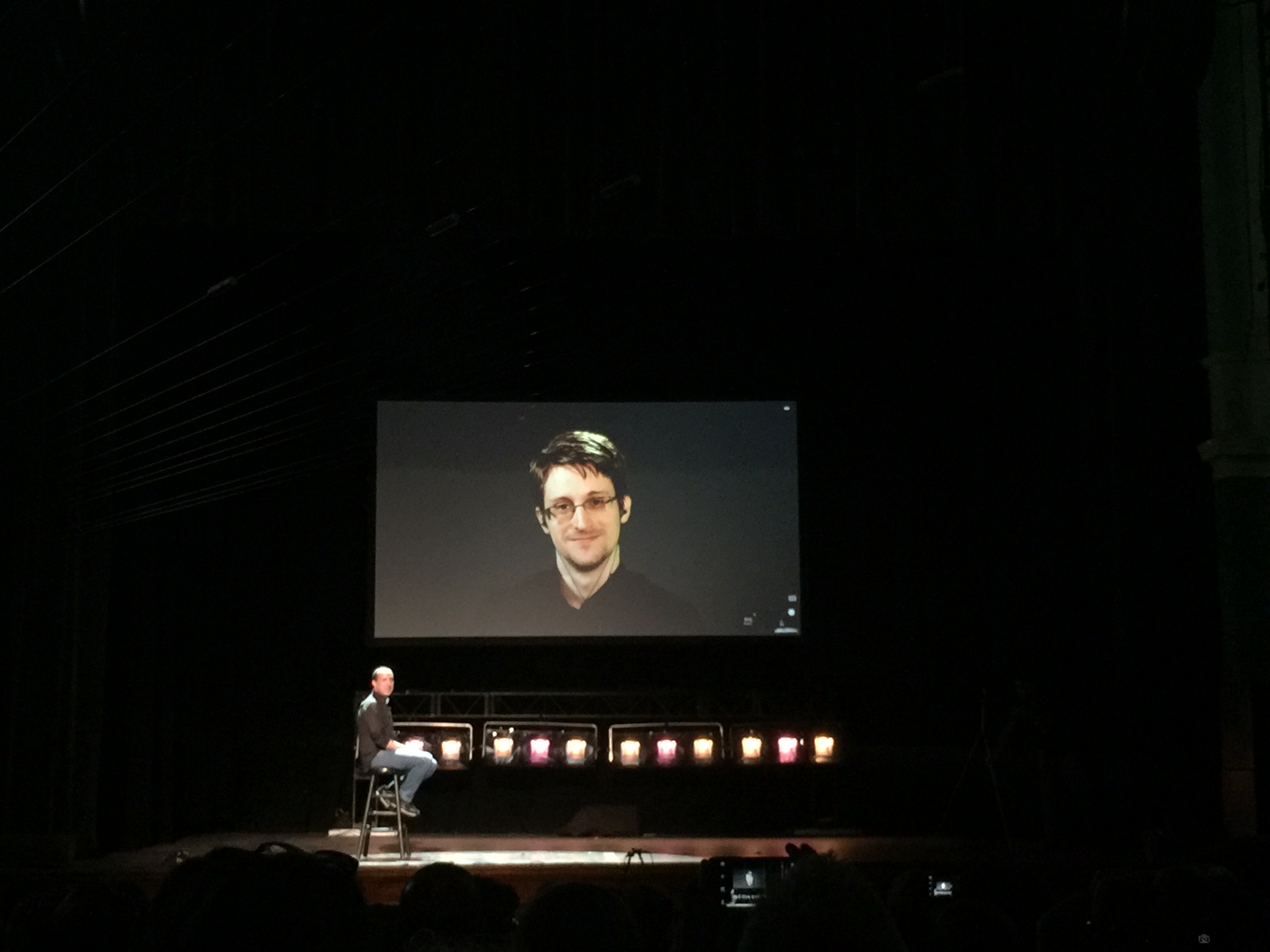 There was quite a bit of applause when the moderator said that hopefully Snowden would be soon recognized as the hero that he is. Some people, however, notably abstained from clapping. At the moment the moderator asked Snowden what it meant for him to be living in exile but still able to be present via telepresence, the video feed cut out due to technical difficulties. The moderator said, “I’m sure he’s disappointed that he can’t tell you this himself, but I know how he wanted to end this session. He wanted to say that he would rather be without a state than without a voice.”

After this opening, I went to record a session with GE’s Vice Chair Beth Comstock, who focused on mindshare and personal connections in storytelling.

Beth talked about GE’s geek culture and the power of inviting others to help tell your story. She shared insights about GE’s partnership with the now bankrupt Quirky: She explained how, while the partnership was a failure in many respects, the momentum around innovation that it engendered led to the establishment of GE’s new energy efficiency business–Current.

Through my job at GA, I have had the incredible opportunity to work with GE to design digital training for their IT leaders, and listening to Beth talk about the power of an authentic, common voice made me love GE even more. Her closing comment: Find your true narrative and word of mouth will amplify it. Great stories have a way of getting told. Beth’s session was my last, so after it ended, I hopped on the bus and left the Future of StoryTelling.

There was a very thoughtful and conscious thread running through the whole event about storytelling as a way to express your voice and spread powerful messages to the world.  I left the conference feeling that the fundamentals of storytelling will remain the same, but that given today’s technology, the power of one person’s voice can be amplified exponentially. The power to create change through stories is infinitely more possible today.

And I can’t wait to see what next year’s Future has in store.

Learn how you can apply these learnings to your team.