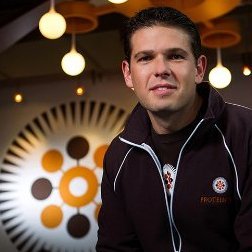 Matt Matros has been CEO of FarmedHere since July 2015, where he uses his entrepreneurial spirit and passion for food and wellness to set FarmedHere’s vision for growth and expansion plans across the country. Prior to joining FarmedHere, Matt spent over three years in brand management at Kraft Foods and then went on to found the wildly successful restaurant chain PROTEIN BAR®, which focuses on providing fast, healthy, high-protein meals. Today, the PROTEIN BAR(R) has expanded to over 20 locations across the country. Matt currently serves on the board of PROTEIN BAR, as well as the Associate Board of Common Threads, which aims to educate children about nutrition, healthy lifestyles and physical well-being through culturally-relevant culinary programs. Matt was the inaugural recipient of the Chicagoland Chamber of Commerce’s James Tyree Emerging Business Leadership Award in 2012 and was one of Crain’s Chicago Business “40 Under 40” in 2012. Matt was also named one of Chicago Magazine’s Top 100 Most Powerful Chicagoans in 2014 and one of NewCity’s Top 50 Most Influential Chicagoans in Food in 2015. Matt holds his M.B.A. from the University of Michigan’s Ross School of Business and B.A. from the University of Southern California.