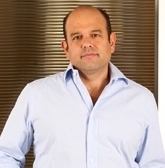 Before joining General Catalyst Partners, Adam Valkin was at Accel Partners, where he was a Venture Partner in the firm’s London office focusing on investments in Internet and mobile services. At Accel he led investments in several early-stage companies including Dragonplay, Hailo, fiverr, Gocardless and Qriously, and also worked with Myheritage, Seeking Alpha and Spotify.

Prior to Accel, Adam was Global Head of Digital Media & New Business at television production company Endemol. He was previously a partner at venture capital firm Arts Alliance where he was involved with its investments in Kenshoo, Propertyfinder, and Prepay Technologies. Adam was also a co-founder, investor and one-time CEO of LOVEFiLM which was sold to Amazon.com in 2011.

As a Managing Director at General Catalyst Partners, Adam concentrates on early-stage technology companies. Adam is currently a board member of CCP (creator of Eve Online), an active General Catalyst investment. He is also responsible for the firm’s investments in LoyalBlocks and Yplan. He is based in the firm’s Cambridge office.