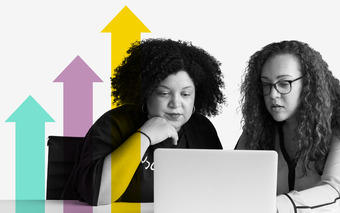 Organizations always want to be smart about how to use their data. But many organizations believe they do not have the time, expertise, or financial resources to cut through the noise and do what is best with their data. This is especially true of non-profit and pro bono organizations, where it may be difficult to allocate time or money that don't immediately go toward the organization's mission.

This speaker series brings together data experts to discuss how data is changing the way businesses run & people live. This conversation will be focused around how pro bono organizations like Statistics Without Borders and non-profits. Learn from the experts about how data-informed decisions are made across teams regardless of budget and how important data is to your team's future.

This event is co-sponsored by Statistics Without Borders.

Matt is currently Managing Partner and Principal Data Scientist at BetaVector. His full-time professional data work spans finance, education, consumer-packaged goods, and politics and he earned General Assembly's 2019 "Distinguished Faculty Member of the Year" award. Matt earned his Master's degree in statistics from Ohio State. Matt is passionate about responsibly putting the power of machine learning into the hands of as many people as possible and mentoring folx in data and tech careers. Matt also volunteers with Statistics Without Borders and currently serves on their Executive Committee as the Marketing & Communications Director.

I am a curious and dynamic data analytics scientist dedicated to leading individuals and organizations to recognize the previously unrealized value of data, especially as it relates to overall business strategy, operational efficiency, problem-solving, data management, automation, and business intelligence. I split my time between consulting and teaching this necessary and under-realized skill set because I am committed to being part of a creative and comprehensive solution to the current data literacy skills gap. Data literacy is a skill set I believe everyone should be given the opportunity to explore and understand for the overall societal, as well as business benefits. Additionally, I am committed to community impact, lifelong learning, and authentic analytical leadership that empowers people to work smart.

Theresa Rinne-Meyers serves as Director of Impact at Rocky Mountain MicroFinance Institute, a nonprofit dedicated to creating economic opportunity through entrepreneurship. In her role, Theresa is building the organization’s impact measurement strategy, research partnerships, and advocacy work. She joined RMMFI in January 2020, after nearly six years at DC Central Kitchen, a nationally recognized social enterprise working to reduce disparities in health and economic opportunity. As Chief of Staff, she oversaw evaluation strategy and design, data systems, strategic partnerships, and special projects – including the implementation of an award-winning grassroots advocacy strategy. Previously, Theresa served as the institutional fundraising and government relations lead at DC Central Kitchen where she oversaw grant management and outcome reporting for nearly $12 million in public and private foundation grants. Prior to that, she led the design and evaluation of food access programs at two grassroots nonprofit organizations. She holds a Master of Public Administration focused on social sector evaluation and public policy, an MBA Certificate in Social Entrepreneurship, and a bachelor’s degree in nonprofit management from Indiana University.

Davina P. Durgana, PhD is an award-winning international human rights statistician who has developed leading global models to assess risk and vulnerability to modern slavery. Dr. Durgana is a Report Co-Author and Senior Statistician on the Walk Free initiative’s Global Slavery Index and Senior Multilateral Engagement Adviser for the Minderoo Foundation. She is an American Statistical Association Statistical Advocate of the Year, internationally elected Vice Chair of Statistics without Borders, and a Forbes Top 30 Under 30 in Science for 2017 for her work on statistical modeling, human security theory, and human trafficking. Dr. Durgana is an inaugural 2020-2022 Ambassador for the American Association for the Advancement of Science to motivate women and girls to pursue STEM careers.

Dr. Durgana is affiliated faculty at National Defense University, senior visiting faculty at Oxford University’s Green Templeton College, and served as Assistant Professor of Sustainable
Development at SIT Graduate Institute in D.C. where she served as Lead Faculty on the Inclusive and Human Security Graduate Certificate program with the Institute for Inclusive Security where she pioneered course offerings in effects of irregular warfare and conflict resolution. Dr. Durgana was selected as a Google Fellow for Technology and Social Change for her work in Human Trafficking and Technology. She was also awarded with the Trafficking in America Task Force Award for Service for her contributions to the Anti-Trafficking Field in the United States and was named as a Disruption Awards Foundation Fellow for 2018. She serves on several expert groups for the United Nations, the Department of Justice, and the National Science Foundation.

Dr. Durgana also grounds her academic and practitioner background in human trafficking issues with her volunteer activities. She has served as a sex trafficking specialist with the National Court- Appointed Special Advocates in Washington, D.C., she has used her knowledge as a member of Volunteer Fire Departments and an EMT to develop human trafficking-specific protocols for training and continuing education requirements. She has served in Washington, D.C.,Maryland, and Virginia as a mentor with Big Brothers Big Sisters.

Dr. Durgana starred in two segments of CBS Mission Unstoppable and she will be featured in the upcoming 2021 children’s book, Wonder Women of Science: How 12 Geniuses are Rocking Science,Technology, and the World by Candlewick Publishers highlighting the work of today's most outstanding women scientists. She is a mentor with FabFems and Girl Scouts of America.

Statistics Without Borders (SWB) is a volunteer Outreach Group of the American Statistical Association that provides pro bono services in statistics and data science. We work to improve decision making and knowledge in efforts that promote welfare through the proper application of statistical principles and best practices, where access to such resources is limited.

You’re following Talk Data to Me: Nonprofits and Community Organizing.