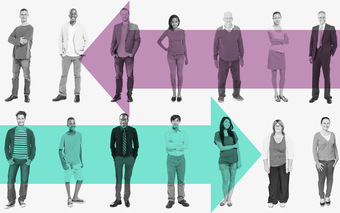 Join CMO of WeUp, Liz McLemore, and four tech leaders to discuss professional relationships' real impact. Who you know can mean the difference between getting your foot in the door or standing outside knocking. In this interactive session, you will gain practical guidance about fostering professional relationships to enhance your career goals and participate in a hands-on product development exercise.

Britney, being one of the design backbones of the Drumbeat team is considered more than just an Interior Designer. With exceptional talent in space planning and workplace strategy, Britney has developed a holistic approach to all design projects. Britney keeps projects moving full steam ahead and is seen as an unbeatable force to see a project through to the finish line. As an instrumental part of all INDUSTRY projects, Britney works with each and every tenant to ensure they have all of their programming needs and growth laid out to have a successful space to create successful business.

Patricia Dao is a serial entrepreneur with an emphasis on product management, operations and marketing. She has an extensive background within the technology start-up industry, in both consumer and enterprise products. Patricia has held pivotal business, operational and product development roles at three successful start-ups, including TagWorld.com/Flux.com (acquired by Viacom), Mozes Mobile (acquired by HelloWorld), and co-founded VoxBloc.com (acquired by Dominion Enterprises in 2012). She has also implemented social and mobile marketing strategies within major brands such as Red Bull North America, Nike, Ford, Universal, Warner, Sony and more.

She currently serves as CEO of DailyKarma. With Patricia's extensive experience in social and mobile and her passion for technology that can impact social good, she leads DailyKarma's international team of technologists and social impact leaders to build b2c and b2b platforms that help the greater good.

Most recently, DailyKarma launched an e-commerce subscription platform called 'Shop for Good'. The platform enables brands to launch cause marketing campaigns within their e-commerce experience. Within one year, Shop for Good has been downloaded by 2,500 brands, raised money for thousands of charities and has proven to help brands increase their average order values and shopper conversion rates.   Patricia was a 2019 Shopify Unite Fund Recipient and Shop for Good has been celebrated by Shopify as a 'Top Trending App' and 'Feature Staff Pick'.

Patricia also speaks and writes about women entrepreneurship, specifically the advancement of women in STEM fields.

Jeremi Dudu is a UX/UI Designer based in Los Angeles, who specializes in designing mobile applications. He found his passion for digital design in 2014 while taking General Assembly's Web Development Immersive course, where he created logos for classmates and built websites in Ruby on Rails.

His diverse background working as a barber, DJ, salesman, coach and teacher has shaped the empathy he has for the end users who use the products they love, and influenced his design process. Dudu believes that an important part of taking a user experience to the next level, comes through understanding the goals of the individuals on his team.

Over the past six years, Dudu has worked on consumer products for web, TV and mobile applications. In 2017, he began leading design for FandangoNOW's mobile Android Application. That same year, he was also hired as one of the first UX Designers at Rotten Tomatoes where he helped build an in house User Moderation Tool. And after his transition to Salesforce in 2018, he lead design for Philanthropy Cloud's mobile iOS application.

As a first generation Belizean-Nigerian-American, Dudu has always been interested in improving the socioeconomic standards for the people of his community. His overall life purpose during the past decade has been to empower people of color to learn how to harness their creativity through technology, in order to prosper economically and ultimately improve the conditions for generations to come. Through speaking engagements and one on one mentorship, Dudu has been able to help young people start or transition their careers into the field of design.

Dudu spends most of his free time with his wife Evelyn and young daughter Ellie. The family has over 40+ house plants, and some day they wish to live in Mexico to run a design studio together. Currently, Dudu is learning about interior design and has the goal to work on the interiors of restaurants in the city of Downey where he resides.

Lyn Muldrow is a software engineer, writer, and speaker who loves solving problems and educating the next generation. She currently serves the community as a Senior Developer Educator for DigitalOcean, creating learning materials, tutorials, and more for the benefit of new technologists.

Lyn's love of sharing educational experiences began through her own journey as a software engineer and educator. She has also contributed to LinkedIn's UI codebase and Partner Engineering program, taught youth to code with Hack the Hood, and understood tech education pedagogy and strategy through experiences as a student and mentor at General Assembly and Telegraph Academy.

In her free time, Lyn loves exploring nature with her family, painting, playing the kalimba, and diving into a good video game adventure.

Liz McLemore is a cross-channel digital marketing professional with nearly twenty years of experience in the fields of marketing, software development and technology. Liz has provided strategic recommendations and actionable industry trends to industry-leading brands including adidas, Google and USAA.

In her current role as interim CMO of WeUp, Liz is developing the overall marketing strategy for the company in anticipation of their Q1 2021 launch, as well as all other marketing efforts.

At her core, Liz McLemore is a relationship builder who loves a good story. Her professional career has been dedicated to crafting and sharing meaningful, persuasive data driven narratives that help her clients and colleagues understand and optimize their programs, with a steady eye on the ever changing digital landscape.

As a public speaker, Liz has addressed audiences across the country, providing expertise, insights and best practices in digital marketing, with her unique humor and insight. She is also a podcaster and content creator, having launched In the Blackseat, a meaningful look at the diversity of the Black experience exclusively from the vantage point of Black people.

WeUp, a B Corp, is a social challenge app that rewards people to stick to their goals and solve social problems. Launching in 2021, WeUp incentivizes people to take social actions that can impact several of the United Nations 2030 Sustainable Development Goals.

WeUp is a family-owned company co-founded by TEDx speaker and CEO Ramona Wright and her brother, visionary founder Voltaire Xodus. Their late mother, and entrepreneur Adelaide Smith, is the inspiration behind WeUp. As a single parent, she experienced many hardships. Nevertheless, Adelaide continued to live her legend by applying her mantra, “see beyond your circumstances by staying focused on your goals.” WeUp is inviting GA event attendees to be among an exclusive group of beta subscribers.

To pre-register for WeUp, and for more information on the legend of Adelaide Smith, go to www.weuptheworld.com.

Our team of full-stack engineers, product designers, content creators, and operations specialists are here to be your cost-effective engineering team.

We developed an entrepreneur-friendly product process that quickly turns out quality, well-documented, scalable products. We'll iterate alongside you as your team's needs evolve.

Our team is made up of multiple-time entrepreneurs. Because we've been through it ourselves, we know how to build tech that scales with your business. If you need MVPs, pilot programs, or support as you scale, we're here to help.

Social Currant is a Washington DC based creative agency that works with social impact organizations and nonprofits to help them reach audiences more effectively. They have worked with organizations like The AIM-HI Accelerator Fund, the former VP of Talent at LinkedIn as well as local news organizations doing everything from TikTok campaigns to community building. Reach out to ashwath@socialcurrant.co for more!

Crafting Content Ideas: How to Create Stories Your Audience Will Love