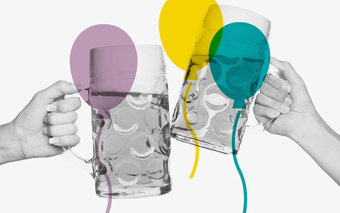 Data is changing the way breweries source ingredients, distribute, and craft good beer. Join us to learn more about the challenges and opportunities in mastering a good brew and learn how these breweries are changing the industry forever.

Elizabeth Waters is the Sustainability Coordinator at Upslope Brewing Company in Boulder, Colorado. She has worked in the craft beer industry for six years and feels it's a great platform upon which to address issues of sustainability.

David Norman is the CEO and Founder of Arryved, Inc. Founded in 2015, Arryved is a Point of Sale technology that focuses on the needs of beer patrons as well as the people who serve them, providing a best-in-class experience for the craft brewing industry and beyond. The system is completely mobile and facilitates a more fluid (insert pun) service model over traditional POS systems. Arryved is pioneering the “Craft Tech” category with over 700 clients in 49 states.

David was a Senior Staff Software Engineer at Google and has over 20 years of experience in payments and security technologies. He strives to advance the payment industry by developing alternatives to credit cards and contemporary methods of financial transactions. Arryved makes a huge leap forward in that endeavor.

Neil and his wife Amy always knew they wanted to own a small business, but for years “It Was All a Dream.” The started a family and worked their corporate America jobs. During this time Neil became super passionate about homebrewing; the microbrew industry was starting to boom, and they decided to make their dream a reality.

Neil added official training by attending the American Brewers Guild brewing course in Vermont. He was instantly a fan of the beer styles he experienced there, and they became a large influence as he started defining what types of beers HeadFlyer would represent.

In 2016, Neil, Amy and their partners found a 100-year-old textile manufacturing facility and had the vision to rehabilitate it into a unique taproom in Northeast Minneapolis. There were endless challenges of converting a 100-year-old building into a brewery, but we were able to nicely fit a 15 BBL production facility and design a one-of-a-kind taproom. Neil began brewing his favorite styles, developing HeadFlyer’s flagship favorites. He also implemented a small batch series, fondly named “Beyond the Door” after a particularly unique door that remains in the brew lab from the building’s earliest days. From the beginning HeadFlyer Brewing has aimed to provide a unique, welcoming space for all, including children and dogs.

In his other life, Neil is a passionate technology architect in the data and analytics space. He has worked on a wide variety of projects from data visualization to machine learning to IoT. He enjoys utilizing this unique combination of skills to add data automation and intelligence to their brewery operation and is always looking for new ways to optimize their operations using data.

When not working in IT or at the brewery Neil, Amy and their three kids are spending time adventuring, exploring new places and experiences to inspire their next great brew.

When he is not busy defending his title as a Noted Twitter Villain, Andy Crouch is an award-winning freelance writer whose thoughts on beer have been featured in USA TODAY, the Washington Post, and many other publications, podcasts, and media outlets, including National Public Radio’s The Splendid Table. A founding writer for BeerAdvocate Magazine, Andy’s column, Unfiltered, appeared in more than 130 issues of the publication. He is also the author of two books, Great American Craft Beer, published by Running Press, and The Good Beer Guide To New England, published by the University Press of New England. Andy is the publisher of Beer Edge. He is a devoted lager enthusiast and pilsener apologist. He is on Twitter @Beerscribe.

Growing up in Toledo Ohio in the 70 and 80's didn't provide much in the terms of beer as the younger generation knows today. A wall of American style lagers of which most no longer exist was the option. During my formative years at Kent State University I discovered Samuel Smiths Oatmeal Stout. It was transformative to say the least. I never knew beer could look, smell or tasted like that. Not soon after that fateful night life got in the way and back to light beers once again. No dark beers to be found in North Carolina after relocating for work.

4 years later I f found myself living in Colorado once again the passion for beer returned. My parents gave me a beer in a bag gift for Christmas. The year was 1994 and my home brewing adventures began. Half the fun of home brewing at that time was finding the ingredients and equipment there were no local home brew shops like today, no Amazon, no online shopping only yellow pages and those pages weren't filled with home brew shops. Certainly not in Breckenridge Colorado.

Again life got in the way and it was time to grow up and quit skiing every day. I changed careers in 2000 and moved away from accounting to Information Technology going to work on the y2k bug in Redwood California at Oracle's head quarters. Shortly thereafter I was assigned a project in Venezuela finding the country's only brewery Polar. After a year I was assigned another project in England where I drank some very interesting cask beers with names such as Storm Damage and Witches Brew pouring directly from a long draw system in the cellar. This was when Stella was Stella prior to Inbev and you could get a Guinness regular or extra cold on tap. I was in heaven.

After returning from England my home brew changed quite drastically. Once again time to get a move on and continuing the passion for beer and skiing. I moved to Park City Utah. There is a reason the license plates have greatest snow on earth embossed on them. The state bird should be a skier. Skiing, home brewing and IT what could be better? Life was good, Utah beer in those days not so good. I missed Colorado beer. Then in 2008 the dreaded collapse of the market, recession and IT was turned on its head. I had to lay off my team and as that happened my number was getting closer and closer. I knew the time had come my head was on the block. Lucky for me IT paid well and my expenses were low, all travel and food were covered each week. I was set to wait it out but the prior year the company I worked for Rapidigm was sold to Fujitsu and the fun of IT with it. I didn't want to go back, didn't know what to do. My wife said start a brewery, ya right start a brewery how many wives tell their husbands to start a brewery? No better time to start a company than in a recession right? Oct 2009 came and with that we became professional brewers obtaining our TTB Notice. Oh my God what do I do now, I know absolutely nothing about commercial brewing and here we are today. Who would have thought that brew in a bag Christmas gift in 1994 would lead to 2 Great American Beer Festival gold medals in 2018 and 2019?