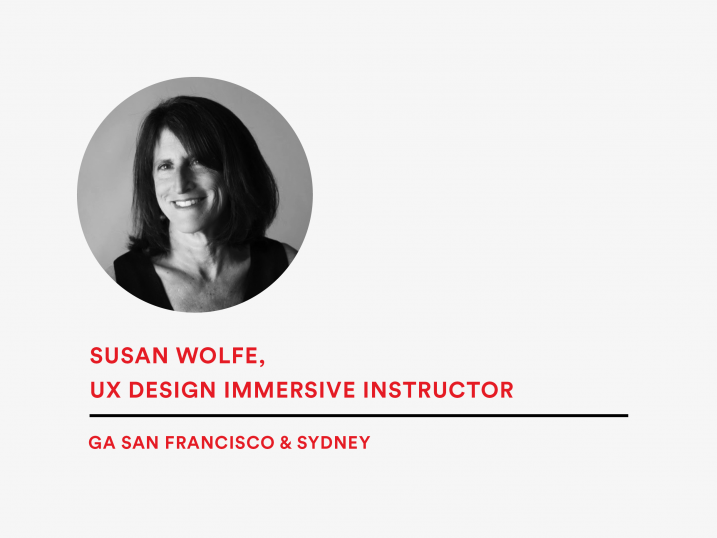 Designing to Make a Difference

Susan Wolfe, who teaches GA’s User Experience Design Immersive (UXDI) in San Francisco and Sydney, has practiced UX design, run consultancies, mentored project teams, and introduced UX design practices and cultures into organizations around the globe, including IBM and NASA. She has established and managed in-house UX teams within software, hardware, and services companies in the Silicon Valley. Susan also shares her expertise as a teacher and mentor, leading courses at universities in both California and Australia and now General Assembly. Read her articles “A Beginner’s Guide to Service Design,” and "A Beginner’s Guide to Usability."

How would you define user experience design in two sentences?

UX design is the art and science of creating the most appropriate way for people to achieve their goals. Crafting great user experiences requires listening, empathy, iterative design, critique, refinement, facilitation, and continual communication and collaboration.

What do you love about user experience design?

It’s applicable to everything — and capable of making a real difference in the world.

What’s an example that embodies the best of what UX design can and should accomplish in real life?

At so many levels, being a UX professional is all about communication — it’s certainly at the heart of how we design. It’s about communicating with users, stakeholders, and other designers, and sharing our design ideas with those who can make things happen. It’s also at the heart of what we design, because at the end of the day, our solutions must readily communicate its purpose and functionality.

One of my students summed up the experience wonderfully when she recounted how she went to visit her family toward the end of the course. She came back the next day and told me that her grandfather said, “I don’t know what you’re learning in that program, but you’ve certainly gone from someone who I couldn’t understand to clear and articulate communicator!”

What are some examples of companies excelling in UX design?

It’s easy to think of the poster children for UX design — design-thinking consultancies like IDEO or everyone’s favorite example of “good design,” Apple. Of course these companies are doing fabulous work. However, I’m most excited about the ones who are using design to empower people and make a difference in the world. It’s the smaller startups and agencies with a focus on social innovation (e.g., mission-driven organizations such as Kiva, change.org, or agencies such as The Republic of Everyone in Sydney).

It’s also industry-specific individuals and organizations on a mission to change a broken system (e.g., in health care, Dr. Jay Parkinson has dedicated his professional expertise to redesigning health care. The Dell Medical School is also designing a system to go from fee-based to value-based services). It’s also government organizations focused on really changing the nature of citizen involvement and engagement (e.g., at the local level in mayors’ offices in San Francisco or New York City, or federally with the Digital Transformation Agency in Australia or 18F in the United States). It’s people and organizations like all of these that are really using design to change the world.

Why should someone learn essential user experience design skills at GA?

GA’s instructors are experienced UX professionals, all of whom speak from practice, not just theory. They’re also exceptional instructors. Our UXDI course is very hands-on, both in terms of allowing people to hone their craft as well as developing the professional skills necessary to thrive in this industry.

What personal qualities will set someone up for success in UX, both in class and as a designer?

Being empathetic, curious, driven, flexible, comfortable with ambiguity, and communicative.

Superstar students come into the course with an open mind and a motivation to learn! They take responsibility for what they put into the course and into their ongoing professional development. They have humility, flexibility, and don’t take themselves too seriously. They embrace the idea that UX is a team sport!

What was your path to becoming a teacher and leader in user experience design?

Like most people who have been in this field for a while, I didn’t set out to “do UX.” I fell into it when I was in grad school and desperate for an escape! I thought I wanted to be in academia, and back then, the only route to doing so involved a Ph.D. What I didn’t count on was the fact that I hated everything about the program I was in. I pondered my options and considered a second master’s degree in computer science, figuring that a combination of psychology and computers might make me more employable.

Fortunately, back then, IBM specifically sought out folks just like me (doctoral candidates studying experimental psychology) for internships in its human factors department, because we knew a lot about perception and memory and how to run experiments and analyze data. Basically, I was ripe for doing usability testing and applying cognitive psychology principles to design but didn’t know it! After that internship, I returned to my doctoral program but quickly realized that the world of human factors was exactly what I was looking for. After one more semester, I put my Ph.D. on hold.

Why did the opportunity to teach at GA appeal to you?

I’d already had lots of teaching experience before I joined GA, but what attracted me was its practical approach to developing 21st-century skills, which prepares students to apply their learnings to their current roles or pursue new careers. GA leverages the expertise of its instructors to shape any particular instance of the course to capitalize on their background.

On a personal level, I saw GA as a great opportunity to give back to the industry as I share my experiences and help skill up the next generation of UX professionals. And, from a totally selfish perspective, GA is a great way for me to split my time professionally between Sydney (where I’ve lived since 1995) and San Francisco (where I grew up and started my career). I’ve been so fortunate to be able to live this dual life!

Supportive, compassionate, flexible, and with a hefty dose of humor!

That’s simple — all of my students and all of their successes!

How do you help struggling students break through to meet or go beyond their minimum GA course requirements?

Each student takes this course for their own reason — my job is to help them understand how what they’ve done already has relevance to the skills required in UX. There’s always something in their past that they can leverage in their future. I also constantly remind people that UX is a very, very broad field and you don’t need (indeed, can’t) be an expert in it all. UX also involves continual learning — it’s not a formula that you learn once and apply procedurally.

This course’s requirements are fairly rigorous, but there are always opportunities to do more. I provide additional resources beyond our lecture material and encourage students to dig deeper into any of the topics that interest them. I also encourage them to go back and extend the work they’ve done on previous projects as they acquire new skills. And I definitely encourage them to embark on independent passion projects where they can apply their skills beyond what we assign in the class. I’m always open to discussing and exploring ideas with students and reviewing their work.

Our “scaffolded” approach to teaching the principles (starting with introducing some basic concepts for use on an initial project and then continually introducing more skills to be applied to more advanced projects) means that students have the opportunity to put the skills into practice immediately (even on Day One!). With this approach, students learn that UX design is a mindset, not a formula, and that their biggest asset is their ability to think through situations and determine the best way to proceed.

What are some free resources and tools a student can use to stay up to speed with the industry?

You could go crazy trying to keep up with all of the free resources out there. Given that UX is so broad, it’s difficult to make recommendations without knowing a person’s specific interests. However, if you want to develop more and more awareness of what’s going on in UX, you should definitely follow UX design articles on Medium. A couple of other good sources include sidebar.io and uxdesign.cc.

What is the best way to get practical, real-world experience in user experience design?

Participate in hackathons and design jams. They often lead to ongoing opportunities to flesh out ideas. Offer your services (for a limited time, of course) to organizations that could benefit from your skills. This could be for a cause that you’re passionate about or a hobby you have. It’ll keep you practicing the craft and add to the projects you can include in your portfolio (or at least provide examples you can discuss in interviews). Another way is to seek out mentors and inquire about opportunities to shadow them. Finally, of course, there are more formal internships, which will certainly give you more practical, real-world experience.
Ask a Question About Our Design Programs

Learn how to leverage user insights, research, wireframes, and more in this part-time UX design course.

Learn to design digital products and services that delight users and anticipate their needs in this online course.