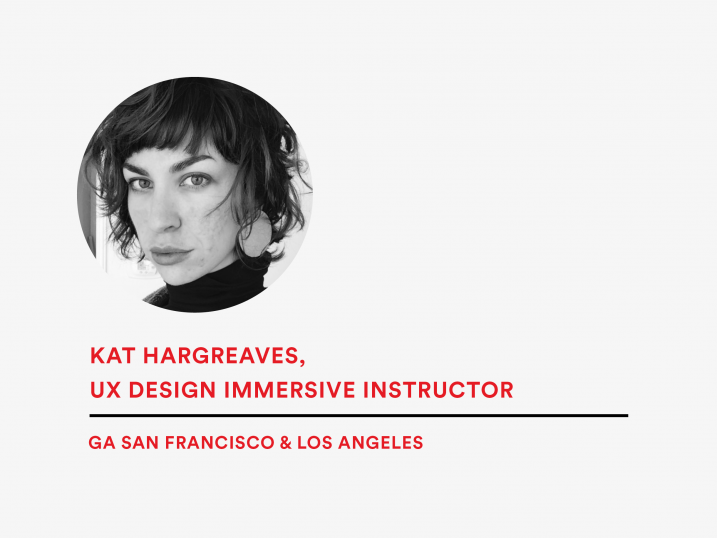 Katharine Hargreaves is a UX strategist, educator, and facilitator working at the intersection of social impact design and education. She teaches the User Experience Design Immersive at GA’s Los Angeles campus. Katharine believes that human-centered design heals the world, and she’s dedicated to building tools and systems that empower people everywhere to be problem-solvers. Read her articles "A Beginner’s Guide to User Experience Fundamentals," and "A Beginner’s Guide to Information Architecture."

How would you define user experience design in two sentences?

User experience design is putting people before profit. It is an iterative process that emphasizes learning over perfection.

What do you love about user experience design?

I believe that UX is the toolkit of the future. Teaching these tools is one of the most empowering experiences I’ve ever had. UX is more than a field — it’s a critical skill set that every human should have access to.

What’s an example that embodies the best of what UX design can and should accomplish in real life?

I love this guerrilla UX project that redesigned parking signage. Started in Los Angeles by Nikki Sylianteng, it exemplifies how UX can rethink a solution that deeply impacts people all over the city. I also love that it’s not digital. Something I try to convey to students is that UX is not limited by an interface — it can solve problems anywhere and everywhere.

Why should someone learn essential user experience design skills at GA?

GA is one of the few modern educational institutions offering relevant vocational programming in an active learning environment. GA practices what it preaches, which means that students benefit from material validated by experts in the field — first in the curriculum, then in the classroom. I also believe that project-based learning engages students more effectively. The UX toolkit is so robust and flexible that it can be used in many different contexts, and that’s hard to teach from a book.

What personal qualities will set someone up for success in UX, both in class and as a designer?

Someone who embraces challenge and can navigate complexity. Someone who can give and receive feedback effectively, and bring others along with them in their design journey. Someone who translates requirements into design decisions. In my mind, success as a designer is attributed to the ways in which one is able to extend their learnings to others while keeping users front and center.

People who are systems thinkers have an excellent foundation for a successful UX career. I also think people with well-developed emotional intelligence and interpersonal skills are naturally empathetic, making it less of a muscle they develop and more of one they flex in new ways.

What was your path to becoming a teacher and leader in user experience design?

I feel like I have been called to teach for most of my life and most of my natural gifts and talents lend themselves well to the education space — yet I resisted. I’m unhappy with the state of education in America, and I realized that I thrive when faced with a gnarly challenge. So when General Assembly offered me an opportunity to practice my deepest gift, and in a way that presents an alternative to the existing system, I said yes.

Why did the opportunity to teach at GA appeal to you?

I’ve been a member of the GA community since I graduated from the first UXDI cohort in L.A. General Assembly has always welcomed me and my ideas, so I’ve been teaching workshops or supporting other instructors on and off for a few years. GA drew me in because it’s one of the few institutions working to develop educational programming that is relevant, meaningful, and empowers critical thinking and self-development.

I’m here to elevate the minds and empower the hands of students.

During my first cohort, my co-instructor and I decided to implement an activity called “Life Story Lightning Talk” at the end of the day. We had noticed that students were still struggling to present effectively and wanted to design an exercise around storytelling. We asked each student to tell a story that illuminated a piece of their path to becoming a designer. The first day, we had two people: One was a student who was confident and clearly excelling in the course. The second was a student who had been struggling with some personal problems that affected her confidence and overall success. Throughout the course, in private, she had expressed to us her doubts, fears, and desire to do something different. We were worried about her progress.

The first student told a creative, nuanced, and clever story about how he had first learned to write songs and how that taught him about simplicity, construction, and connection. It was humorous, engaging, and uplifting. Then the second student went up. She was not as comfortable speaking in front of an audience, but that day, she told her story humbly, clearly, and without shame. Using simple drawings, she illustrated her user journey from addiction, to self-harm, to jail, to recovery. It was heartbreaking and hard to hear her pain — but so moving to watch her stand up and own her experience before everyone.

Afterward, I walked up to close out the class. Turning to the front and seeing people’s expressions was something I will never forget: Her story had opened them. They were stunned. Some were openly crying. Something had shifted, and the whole class felt it. Creating space for the students to share their struggles and stories and watching them transcend their limitations while their class supported them — that is a profound gift. I am honored to have witnessed that moment.

How do you help struggling students break through to meet or go beyond their minimum GA course requirements?

Ultimately, success is in the mind of a student. My experience has shown that the way we view ourselves, our perspective on the world, and even the language we use defines our possibility space. Helping students reframe what progress or success means to them, manage expectations, and push through imposed and self-limiting barriers is half the work of succeeding in the course.

A lot of that is done by teaching and modeling empathy. As a recovering control freak and perfectionist, I’ve witnessed how my own growth and learning has been inhibited by constraints that I’ve internalized. Helping students see beyond their edges is important. Supporting them as they do the hard work of moving past old ideas and into new definitions is part of unlocking success.

Most high-achieving students are hungry for more, so it’s really about funneling that passion into meaningful activities. Learning how to learn is one of the fundamental perspectives of a successful UX designer, and supporting people in doing that is key. Teaching others how to design a learning path for themselves is just as critical as teaching them tools, and so I always try to incorporate those prompts into lecture.

I believe the curriculum and the community are more powerful when placed together. Having been both a student and a teacher at GA, I can attest to the inspiring network of creators, thinkers, and learners who are drawn here. I’ve met some of my best friends, mentors, and collaborators through GA. It’s a resource that continually gives back to the people who come here to make a change.

What are some free resources and tools a student can use to stay up to speed with the industry?

Medium has been an amazing resource for tools, methods, and expertise from a diversity of practitioners in the field.

What is the best way to get practical, real-world experience in user experience design?

Create your own opportunities. Go out into the world and find a problem to solve. Talk to real people and involve them in your process. Don’t wait for permission from a company to start building solutions — and I don’t just mean digital ones. You don’t need a ton of resources to develop meaningful solutions.

Learn how to leverage user insights, research, wireframes, and more in this part-time UX design course.

Learn to design digital products and services that delight users and anticipate their needs in this online course.