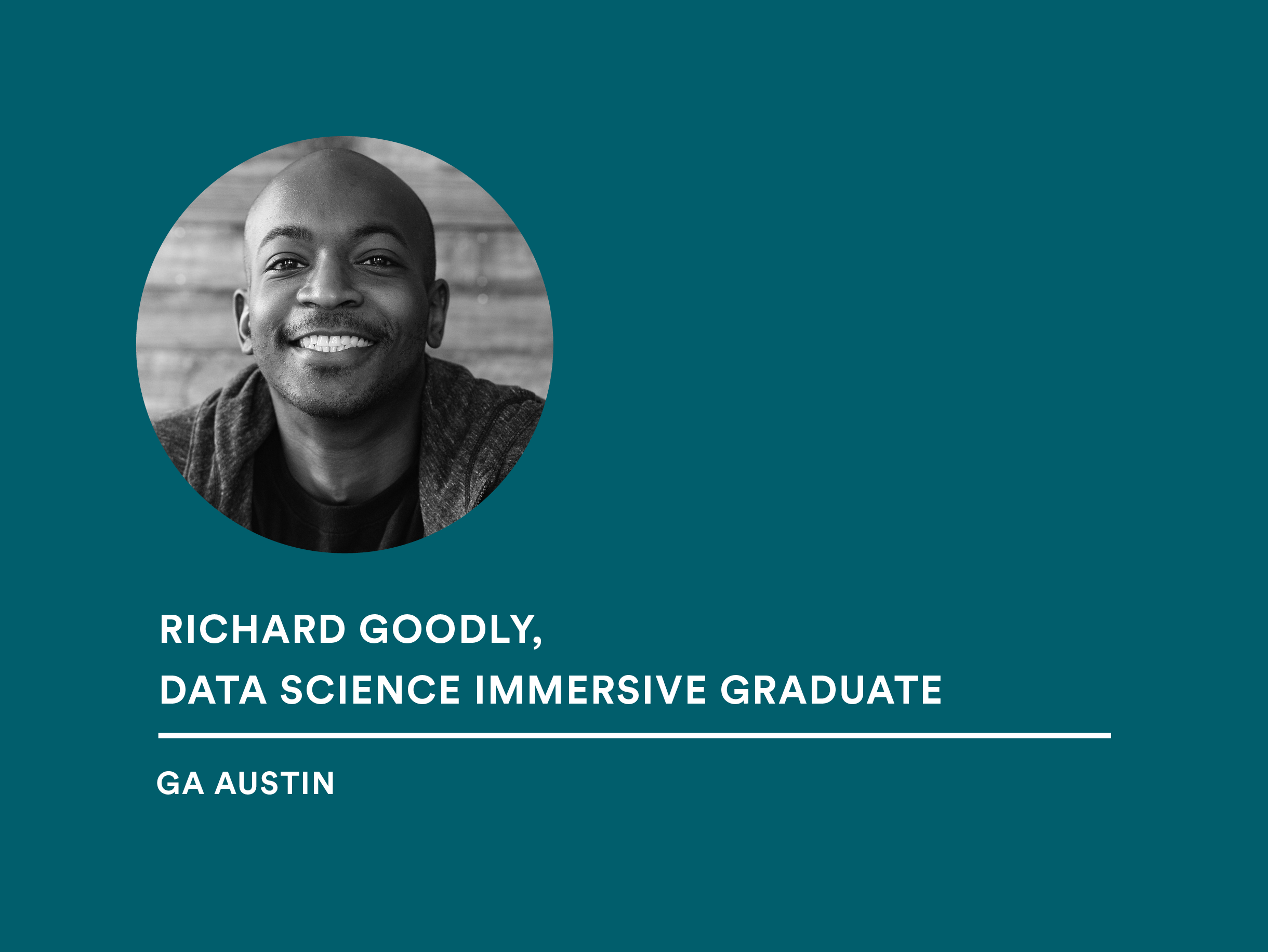 Richard Goodly longed to have a positive impact on the world around him. He valued the personal interaction and problem-solving of his customer service and retail jobs, but felt limited by the reach of his influence and lack of growth opportunities. “I could only serve one customer at a time as a barista, and daily coffee intake isn't very significant in the scope of the world,” says Goodly. And it was while working as a data-entry clerk that he became more curious about data’s endless potential for positive influence in our society. “I wanted to know where the information was coming from, where it was going, and how impactful it would be,” he says.

Looking to kick off his journey in data, Goodly signed up for General Assembly’s online Data Analysis course, where he learned on his own time with a dedicated mentor. “Upon graduating from the program, all I could think was, ‘I need more.’”

Eventually, Goodly enrolled in the 12-week Data Science Immersive at GA Austin, where he not only gained hard skills in today’s most relevant topics — machine learning, Spark, SQL, and more — but also learned to think like a true data scientist. The interactive environment allowed students to explore concepts together: “Those experiences were the best because they provided me the opportunity to study the thought process of a data scientist while working with real-world problems,” says Goodly. “Some things we tried in class didn’t work…so you try another thing. Technology is changing constantly and the biggest thing you can learn is how to keep up.”

After graduating from the course, Goodly was hired as a support analyst at Home Depot’s Innovation Lab, BlackLocus, a team that leverages data to provide dynamic pricing insights to large retailers. He has seen a threefold pay increase from his previous role, and is constantly learning something new alongside his colleagues who are experts in their fields. Goodly also loves working for a company with the power to do good. He was especially inspired by Home Depot’s relief efforts during Hurricane Harvey. “I tend to adopt the values of the business, so working for a company that keeps the consumers’ needs in mind is very important to me,” he says. “The things that go on in my office have the potential to affect millions of people — that blows my mind.”

Make change. Join Goodly and thousands of other GA alumni in the quest for betterment. From full-time career accelerators, to part-time evening courses, to short-form bootcamps, be empowered to achieve your goals at GA.

Ask a Question About Our Data Science Programs

Learn to leverage machine learning, Python, and other key tools to become a data scientist in this career-changing course.