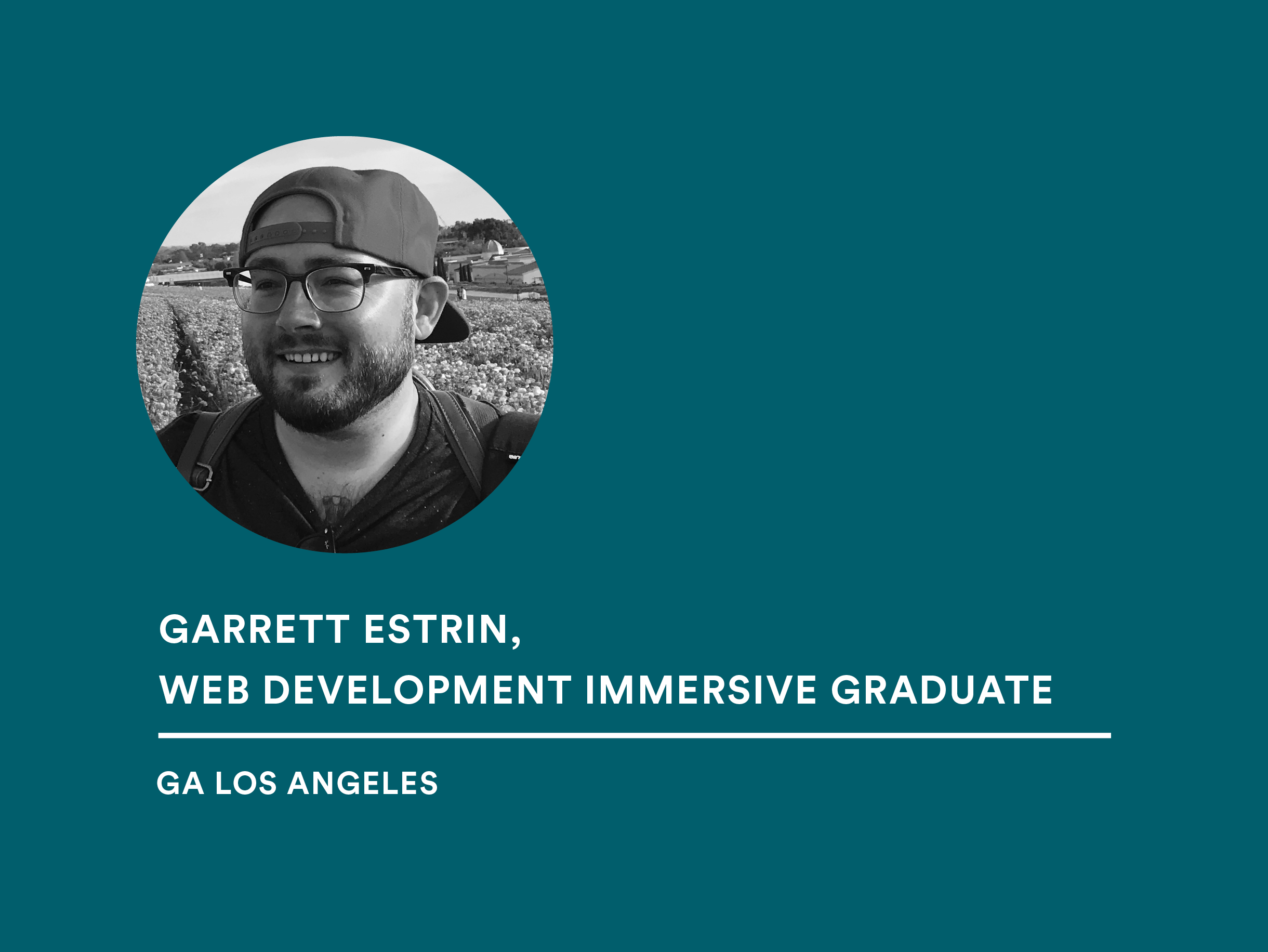 “Why can’t you make money doing that?” This simple question from Garrett Estrin’s wife changed the course of his life and career. “That” was building websites, something Estrin had been doing as a hobby for more than 15 years while managing a grocery store in Orange County, California. After graduating with a business degree, he didn’t have much luck finding a role that wouldn’t require a significant pay cut from his managerial salary. It wasn’t until his wife posed that life-changing question that he even thought about a career in web development.

“Within four months of that conversation, we had sold our house, moved to West Los Angeles, and I was enrolled at General Assembly Los Angeles looking to completely change careers,” says Estrin.

While shopping around for programs, Estrin took a positive recommendation from a friend who suggested GA and did his research. “What made me choose GA was the welcoming, you-can-do-it attitude I got from everyone I talked to who was connected to the program,” he says. He chose the Web Development Immersive (WDI) program, where he could sharpen and grow his coding skills while collaborating with other students. “The best thing about WDI was being able to learn and apply our newfound skills with the other people in our class,” says Estrin. “Everyone was always so excited to be there, and it made the lectures more interesting because everyone was engaged.”

He also enjoyed incorporating other students’ unique backgrounds and interests into his own learning experience, which was focused on key programming topics like JavaScript, Rails, and Git. “Outside of WDI, students were learning iOS and Android development, or data science skills. It was great to be able to interact with them and see how we could take what we were learning separately and put them together to build something great.”

Estrin credits the GA Outcomes team as crucial resource for getting ahead professionally and landing that first role after graduation. “The guidance offered makes a daunting task like finding a job in an industry that you are new to seem very attainable,” he says. “They make you feel like you’re prepared for every interaction with a potential employer and that you have a leg up on other candidates. The GA outcomes team is what really sets GA apart from any other kind of school.”

Armed with tighter skills, Estrin landed a gig as a user interface (UI) developer with Centerfield Media, a company offering marketing and sales solutions for some of the largest names in communications tech, such as Xfinity, AT&T, Sprint, and DirecTV. “What I love most about working at Centerfield is that I am able to take the base skills I learned at GA and build on them to solve real-world problems,” he says. “We are able to see exactly how many visitors come to our web pages, as well as how many of them convert into sales. With those kinds of quantifiable metrics, it’s very easy to see your individual contribution.”

Along with his new developer role, Estrin also stays close to the GA community that helped him reinvent his career as a TA for WDI. He makes sure students clearly understand lessons, and assists them in solving issues using the same tool that changed his life — finding alternate solutions to tough problems.

You can love your work, too. Whether you want to start a new career, advance your current role with coding skills, or be empowered to pursue your passions, there’s an option for you.