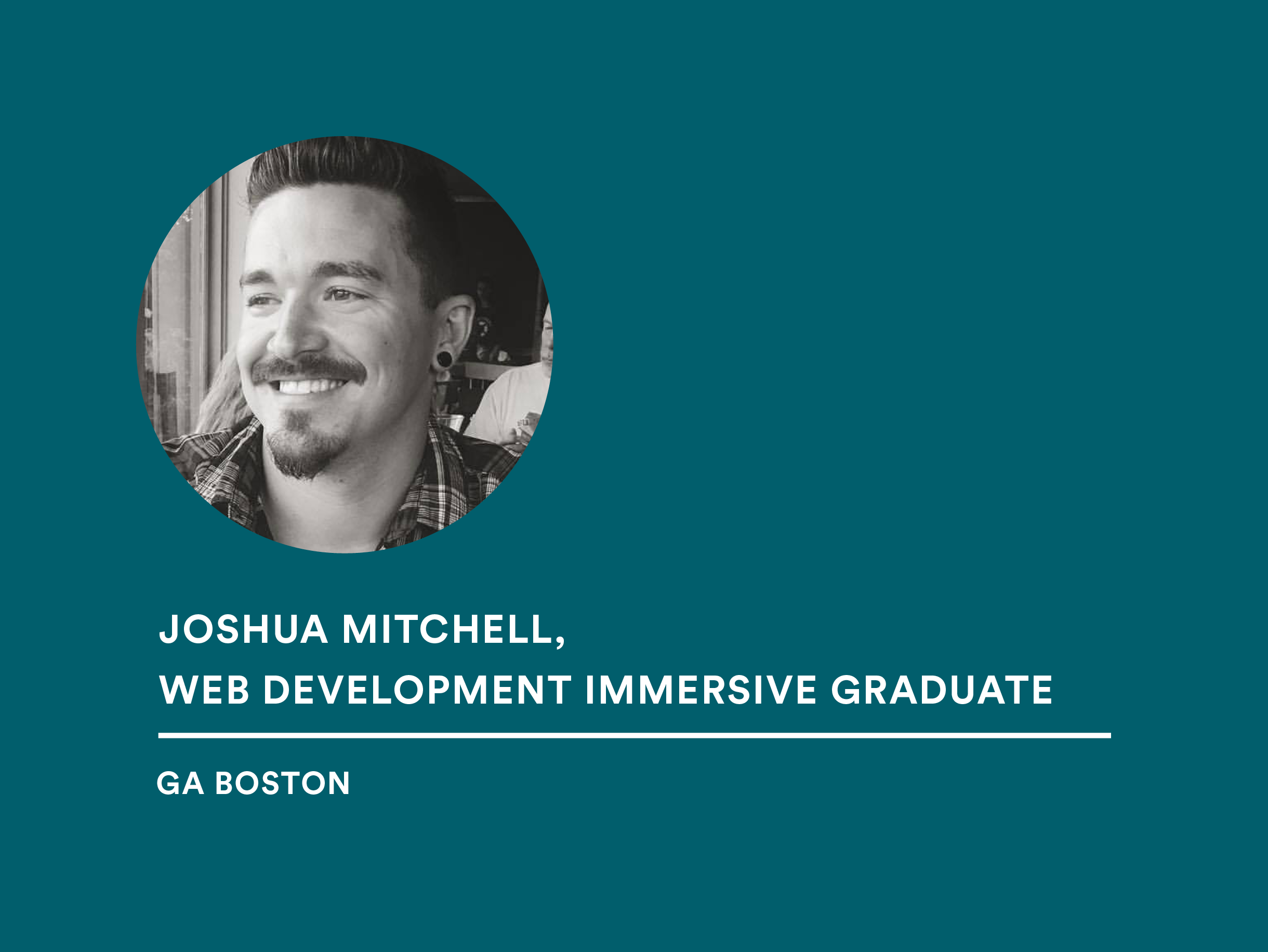 For Joshua Mitchell, keeping his head above water was proving tough. After earning a degree in psychology he realized he’d never use and an unexpected medical discharge from the United States Coast Guard, Mitchell was left feeling unmoored and looking for a career direction he could feel good about. “I had no idea what I was going to do,” he recounts. But his powerlessness was not to last: His girlfriend’s father, a front-end developer, pointed him toward some HTML and CSS tutorials. Once he completed them, a pathway was suddenly clear. “I began looking into the career outlook for developers in Boston, and I was amazed to see the future job projections,” says Mitchell. “That’s when I realized how secure something like this could be, and for me, that’s what I wanted — security.”

A lover of building things and DIY projects, coding was a natural fit for Mitchell. “Web development allows me to tap into my creative side, and for a career, I believe that’s of great importance,” he says. After investigating Boston-area coding schools, he had little success getting his questions answered. But it was different with General Assembly Boston: “The first time I called GA, I was connected with someone to talk to immediately. It felt more inviting and welcoming.”

Once Mitchell enrolled and dove into the curriculum, it was clear how intense the course would be. He says that the Web Development Immersive program was “one of the most challenging things” he’s ever done. He credits his instructors with helping him learn to “struggle properly.” “I don’t mean struggle in a negative way,” says Mitchell. “Franklin Roosevelt said, ‘A smooth sea never made a skilled sailor.’ GA taught me to embrace the struggle, and that’s what I do each time I take on something new.” He says that his experience has given him more than raw skills in JavaScript, APIs, and Git — it’s given him an increased confidence in his own abilities: “I proved to myself that I can do anything I set my mind to, and that will never leave me.”

But graduation day wasn’t the end of Mitchell’s GA journey. The Outcomes team, which provides personalized support to help Immersive students develop skills in networking, professional branding, and more, was instrumental in helping him find a job after the course. “My experience [with Outcomes] was great,” he says. “Finding a job can be even more stressful than the program itself. The team did a great job helping me set up my LinkedIn profile and resume, and taught me how to catch the eyes of potential employers.”

And that’s exactly what happened: Shortly after graduation, Mitchell became a user interface (UI) software engineer at financial tech company Vestmark, making 50% more than his previous salary. He works with a team he loves and feels that GA prepared him to be a lifelong learner. “GA has taught me how to teach myself,” Mitchell says. “That could include learning new tech, or something as simple as finding relevant information about JavaScript methods.” Able to arm himself with new skills to tackle any project, and Mitchell has the mindset to stay competitive in today’s changing tech world.

You can love your work, too. Whether you want to start a new career, advance your current role with coding skills, or be empowered to pursue your passions, there’s an option for you.