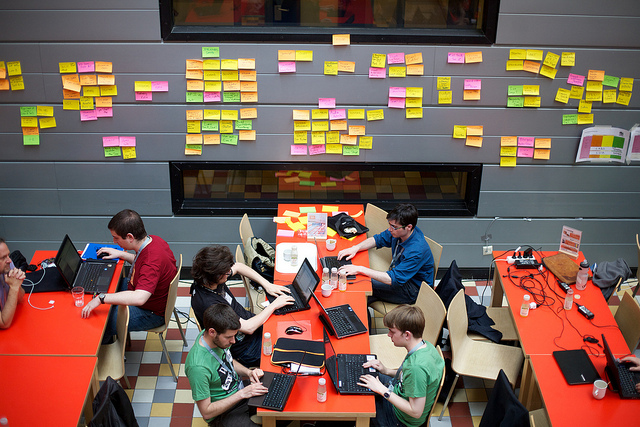 Remember those all-night cramming sessions in college, when you would overcaffeinate, stay up for days, and muster all the focus you could to finish a paper or prepare for a test? Imagine a room full of computer programmers, developers, visionaries, and marketers doing the same thing for a day, a weekend, or even a full week. Instead of cramming, they are competing to create prototypes that innovate on a theme or improve upon an existing project. It’s called a hackathon, and it is has become a regular part of how technology companies do business. In fact, the power of the hackathon has extended beyond the tech industry into countless other sectors.

Whether they’re called hackathons, hackfests, hackdays, or codefests, these marathon brainstorming sessions are today sponsored by companies, nonprofit groups, universities, and other organizations (GA has held a few of our own). Some companies hold them internally, others are open to the broader public. Theoretically, anyone could hold a hackathon. All you need is space, some wifi, and willing participants. Food and energy drinks are also essential. (Sleeping bags are BYO.) People work in teams to come up with and realize an idea, and in the end one concept, app, robot, or website is declared the winner.

History of the Hackathon

While there may have been plenty of informal hackathons in the 1990s that went unnoticed, the first two that garnered wide attention occurred in 1999. An OpenBSD development meeting in Calgary, Canada, and a Sun Microsystem JavaOne Conference in San Francisco that took place within days of each other share the distinction of breaking hackathon ground. Thus, a trend was born.

Remember that scene in the movie The Social Network where the guys in the dorm do shots while they compete to become Facebook’s first intern? That was a hackathon. In fact, Facebook still has internal all-night hackathons every few months. The network’s Like button, the timeline feature, and the extensive gender identification options are also innovations that came to life through hackathons. Google and Yahoo! have held external hackathons open to attendees both inside and outside of the companies, and Foursquare has held global hackathons featuring hundreds of developers at sites around he world.

Grand prizes can range from trophies and belts to significant cash. (One Salesforce.com hackathon awarded a $1 million prize.) But the rewards may be even greater than that. Venture capitalists and angel investors are said to troll some of the most well known hackathons in search of the next big idea. The most well-known story of hackathon startup success is GroupMe, which was born out of TechCrunch’s Disrupt NYC hackathon in 2010. The company went on to be acquired by Skype for a reported $85 million just a year later.

These days it seems wherever there is a tough question to answer or problem to solve, there is sure to be a hackathon. Last year a group in Pakistan held a hackathon to solve political issues. At Startup Weekend Oakland earlier this year there was a hackathon for black male achievement. Public Broadcasting’s POV series has regular hackathons to reinvent documentaries on the Web. A Spartan hack event in August is designed to help improve the sport of obstacle course racing. A group called Hacker League, which helps plan an organize hackathons, has reportedly run more than 600 of them since being founded in 2011.

With a bit of research, you can find a lot of advice for how to have a successful hackathon, including having reasonable expectations, finding good judges, obtaining the right space, offering an unusual prize, picking up trash as you go, and not letting the sponsor or public relations dictate the event. Would-be hackathon planners would probably do well to attend a few different events to get a first-person feel for what works and what doesn’t. You could also hire a professional planning group like Hacker League or AngelHack to help. Just remember, the first rule of hackathons: don’t forget the snacks.

Train for your next hackathon with a 10-week software engineering course for developers from GA.