When Instagram updated its logo in 2016, did you notice? Did it change the way you thought of the app? If so, you wouldn’t be alone — the company’s transition from a tiny toy camera to a bold, gradient icon generated heated debates from social media all the way to Forbes.

The reactions surprised Instagram’s team. The company had just spent the first quarter of 2016 rolling out a controversial new feed algorithm, something that actually changed the way the app functioned, and it caused some minor outcry, but nothing that threatened to permanently affect the app’s user base. But when the new logo went live that May, the pitchforks came out. Users took to Twitter to express their feelings of abandonment, leading some to question whether they actually enjoyed using the product at all.

A brand is much more than a name and a logo — it’s the emotional and cognitive connection a company or product has with the rest of the world. As Entrepreneur writer John Williams says, “Your brand is your promise to your customer.”

Before May of 2016, Instagram’s promise to its users was surprisingly tied to that little toy camera: The app took simple photos with classic filters, appealing to users who were nostalgic for a more analog time (whether they lived through it or not). Its new logo, on the other hand, seemed like a reversal of what made Instagram cool to begin with. It was an attempt to be modern, hip, and current — the exact opposite of the long-extinct cameras it emulated. It raised the question: How did Instagram picture itself, and why did that differ so greatly from how the rest of us did?

6 Ways to Classify a Brand

Jean-Noël Kapferer, brand expert and author of the book Strategic Brand Management, poses a simple question to steer this conversation: “If your brand was a person, who would you compare them with?”

Kapferer’s Brand Identity Prism highlights six categories that work equally well for classifying a brand, as well as a person:

If we were to apply this treatment to Instagram, what kind of person would it produce? Before May of 2016, you might have come up with something like a twee hipster nerd — at least, that’s the way it was personified in this 2013 video by Cracked.

What Instagram failed to recognize was that, while it had every right to change the appearance of its brand, its perception had already been determined and heavily rooted by the public. The new logo felt incongruent with the current perception, making it feel forced and fake. It’s reminiscent of Garth Brooks’ attempt to create an alternate rocker persona, “Chris Gaines,” in the late ’90s. His brooding, soul-patched, fictional counterpart was such a departure from Brooks’ rugged cowboy look that his fans were embarrassed — even if the same style worked perfectly for a musician like Trent Reznor of Nine Inch Nails. In both cases, it came down to what fans had come to expect.

Consumers are gifted at smelling inauthenticity. As a result, when a brand decides it’s time to pivot, that movement must come from a genuine place, answering to an equally genuine opportunity. These opportunities can’t be invented, only discovered. There are a number of tools available for this. For instance, a user experience (UX) researcher might perform a competitive analysis to find gaps in competing products that they can fill. This exactly what Old Spice did in 2010, and the results produced one of the most memorable ad campaigns of the decade.

At the time, Old Spice was struggling to keep its head above water in the competitive field of men’s deodorant and body wash. Axe Body Spray had completely captured the 18-24-year-old market with trendy, youthful packaging and a series of raunchy commercials that suggested women would be magnetically drawn to anyone wearing its scent. Old Spice, once the gold standard of male grooming, had become the brand associated with your grandfather. Even the introduction of more youthful scents and washes did little to move it into the present. That is, until the now-infamous “The Man Your Man Could Smell Like” ad campaign created by the Portland-based agency Wieden+Kennedy.

As it turns out, Axe was ignoring a very large portion of its market: women. Old Spice found that in many households, women were the true power-brokers of what men smelled like. While Axe held a youthful image that managed to be masculine without reminding consumers of their older family members, the brand also embodied the aspects of masculinity most problematic to their female demographic. To these consumers, a deodorant that promised to send dozens of scantily clad models after your husband couldn’t be further from a value proposition.

Old Spice managed to capture the positive perceptions of masculinity held by both men and women, all thanks to one man: Isaiah Mustafa. The handsome, muscular actor spends the entire 30-second spot speaking directly to women, while exemplifying the strong confidence that young male viewers aspired to. If Axe made Old Spice look like an old man, the new Old Spice made Axe look like an immature little boy. What follows is one of the most interesting branding faceoffs of the decade — one that competed not just for deodorant sales, but for which of two distinct ideals would become the modern definition of masculinity.

Branding isn’t a science; it’s an art that requires both a wide collection of tools and a discerning perspective to effectively steer. At General Assembly, in our part-time Digital Marketing course and full-time User Experience Design Immersive program, we explore these nuances using case studies and skills like user research, competitive analysis, and visual design. You can also learn branding fundamentals through short-form, expert-led workshops and events across our global campuses. We believe in a holistic approach to our work, inviting students to collaborate with seasoned designers and marketers to better understand their role in the success of their clients. We look at the stumbling blocks other companies have faced in order to better avoid them, as well as the successes that fuel the kind of work we love to do.

Nick Anderson is a Denver-based developer, designer, and writer. He’s created digital solutions for Bacardi, Angry Birds, and dozens of other brands in more than eight years of working for various agencies and startups. Currently, he teaches the full-time Web Development Immersive at General Assembly’s Denver campus. His go-to karaoke song is “I Wish” by Skee-lo. 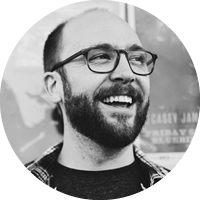 “Digital technology makes it easy for people with ideas to establish themselves or their business as a brand. There’s high demand for those who can take someone’s vision, and create a strategy to propel it into success.”